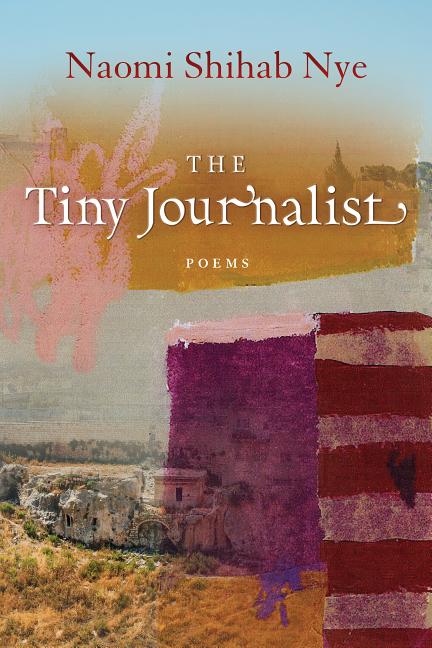 The collection is inspired by the story of Janna Jihad Ayyad, who at age 7 began capturing videos of anti-occupation protests using her mother's smartphone. Nye draws upon her own family's roots in a West Bank village near Janna's hometown to offer empathy and insight to the young girl's reporting. Long an advocate for peaceful communication across all boundaries, Nye’s poems in The Tiny Journalist put a human face on war and the violence that divides us from each other.

What The Reviewers Say
Rave Letitia Montgomery-Rodgers,
Foreword Reviews
Amid unfathomable suffering and sorrow, the book responds to a hammer of apathy, trauma, and violence with allegiance to a higher principle: universal human dignity ... straightforward language carries vast implications that highlight the tension undergirding daily conditions. Every question also implies the power of silence, whether it’s unanswerable or simply ignored ... The collection doesn’t just look at Palestine, but considers what larger networks uphold systemic violence. Often concerned with the disconnect between declarations of moral authority and horrific actions undertaken in its name, these poems undermine the idea of easy righteousness or neutrality. Following the poems’ complex arcs between insiders and outsiders, horror and banality, is both harrowing and mesmerizing ... The Tiny Journalist addresses a crisis of empathy with powerful vulnerability and imagination and has the power to change brave readers.
Read Full Review >>
Rave Susanna Lang,
RHINO Poetry
In Janna Jihad Ayyad, the 'tiny journalist' who began her work at the age of seven when two members of her family were killed, Nye finds the clear and uncompromising voice of a child who is witness to violence and grief and who is not afraid to speak up—to name and record what she sees but also to take part in the resistance ... In this moment of our history, many poets feel called to the poetry of witness and resistance. This is not new work for Naomi Shihab Nye , who has always woven those threads into her poetry, but never more consistently than in this collection. It is a brave collection from a pair of brave souls.
Read Full Review >>
Rave Bailey Hoffner,
World Literature Today
While Naomi Shihab Nye’s newest book of poetry offers no easy answers, its questions push well beyond the margin of the pages ... Bringing what is as concrete, known, and essential as milk into the harsh language of resistance, the lines compel us to recognize the privilege of silence afforded by distance. Startled spaces like this created between the poems and the world continue to echo for me; a volley of fresh, visual metaphors spoken on behalf of those who have often been most powerless in the face of violence ... throughout the work, and often through Janna’s own words, Shihab Nye exalts the wisdom and uncluttered hope of children and of imagination ... Fearless in the face of unrelenting power, the poems are at once tactile and enraged, refusing to acknowledge anyone’s ability to constrain language ... With very few exceptions, the poems in the book are deeply powerful both on their own and in their connections to one another ... With very few exceptions, the poems in the book are deeply powerful both on their own and in their connections to one another.
Read Full Review >>
See All Reviews >>
What did you think of The Tiny Journalist?
© LitHub | Privacy