The Swerve: How the World Became Modern 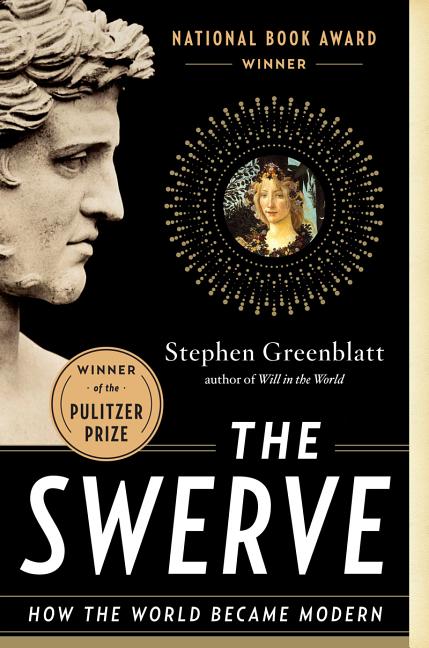 In this winner of both the National Book Award and Pulitzer Prize, the influential Harvard humanities scholar describes how 15th century book collector Poggio Bracciolini's discovery of Lucretius's On the Nature of Things set modernity in motion after a stagnant Middle Ages.

What The Reviewers Say
Rave Maureen Corrigan,
NPR
The Swerve is one of those brilliant works of non-fiction that's so jam-packed with ideas and stories it literally boggles the mind. But throughout this profusion of riches, it seems to me, a moral emerges: something about the fragility of cultural inheritance and how it needs to be consciously safeguarded. Greenblatt, of course, doesn't preach, but, instead, as a master storyteller, he transports his readers deep into the ancient and late medieval past; he makes us shiver at his recreation of that crucial moment in a German monastery when modern civilization, as we've come to know it, depended on a swerve of the Poggio's grasping fingers.
Read Full Review >>
Positive Dwight Garner,
The New York Times
The Swerve...brings us Mr. Greenblatt in his more cordial mode. He wears his enormous erudition lightly, so lightly that most readers will forgive him for talking, at times, a bit down to them. This book is well-brewed coffee with plenty of milk and sugar stirred in ... Approaching Lucretius through Bracciolini was an ingenious idea. It allows Mr. Greenblatt to take some worthwhile detours ... The details that Mr. Greenblatt supplies throughout The Swerve are tangy and exact ... This book’s pumping heart is Mr. Greenblatt’s complicated reckoning with Lucretius’ masterpiece ... It’s possible to admire Mr. Greenblatt’s book while wishing it contained more of the boldness and weirdness he admires in Lucretius. Mr. Greenblatt’s prose, charted on a Geiger counter, would register mostly a state-of-the-art air-conditioner’s steady hum. I found myself longing for a few more unsettling spikes of intellect and feeling. You won’t be bored by The Swerve; neither will you be on the edge of your seat.
Read Full Review >>
Mixed Michael Dirda,
The Washington Post
The Swerve...is a work that a journalist or a hard-working amateur might have produced, a sprawling paraphrase of other people’s research ... this is a book that feels a little mushy and over-sweetened, in the way of so much popular history with an eye on the bestseller list ... To those who have never read much classical literature or know little about the Renaissance, The Swerve may well seem fresh, even though it trots out one historical golden oldie after another ... a sense of the scattershot, of elegant padding, remains ... he takes every possible opportunity to meander away from his thesis about 'how the world became modern' ... By no means a bad book, The Swerve simply sets its intellectual bar too low, complacently relying on commonplaces in its historical sections and never engaging in an imaginative or idiosyncratic way with Lucretius’s great poem as a work of art.
Read Full Review >>
See All Reviews >>
What did you think of The Swerve: How the World Became Modern?
© LitHub | Privacy