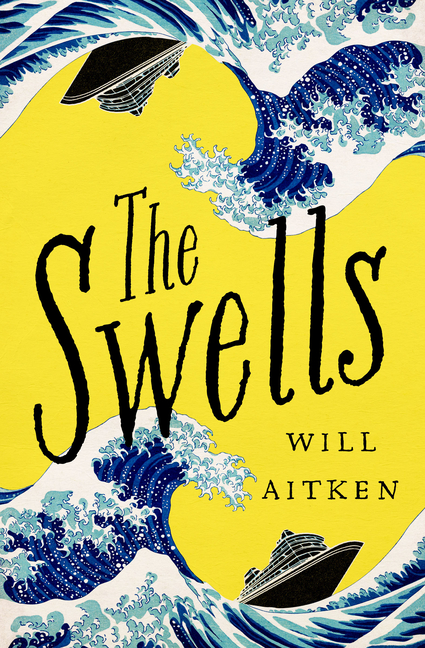 Aboard The Emerald Tranquility, the most luxurious cruise liner on the seas, a class war erupts. Travel writer Briony, confused and terrified by the chaos, must decide which side to take: upstairs or downstairs.

What The Reviewers Say
Positive Gerald Peary,
The Arts Fuse
... [a] zany, demanding satire ... It’s an estimable entry in [Aitkin's] varied literary career ... I do have several reservations about The Swells. I wish we knew more about Briony’s wishes, aspirations, goals along the way, and it kind of gets lost that she’s a journalist and supposedly on assignment on this trip. And the lovely use of language, of unusual, mellifluent words in the first part of the book...are mostly dropped later on. And, yes, the clever satire page after page does occasionally get bogged down a bit ... Still, what a fascinating, skillfully written book!
Read Full Review >>
Mixed Gene Walz,
Winnipeg Free Press (CAN)
It’s advertised as 'a darkly hilarious satire,' a billing that it only partially satisfies. At times it’s dark. It’s only sporadically hilarious (but often amusing). And its satire is scattershot and unsure. The Swells begins brilliantly ... The 'ship of fools' story is also undernourished. The Emerald Tranquility never seems full, nor the caricatures fully fleshed out. Characters and opportunities are slighted. The Swells is amusing but schematic, more like an enhanced outline rather than a full-bodied satiric novel. Sadly, in The Swells it never feels like Aitken has been on a real luxury cruise, which could have helped make the book a richer and funnier experience.
Read Full Review >>
Pan Brett Josef Grubisic,
Toronto Star (CAN)
Across 18 chapters The Swells evolves as a novel at odds with itself. A confection with hopes of providing meaty sustenance, the fourth novel of Montrealer Will Aitken...can’t fulfil disparate aims. The story’s initial—and principal—mode is whimsical comedy that could easily be called Wildean (after Oscar). It’s frivolous and camp and hyperbolic ... The amusing proceedings veer between glib and vapid; verbal exchanges trade in wit, sophisticated ennui and barbed innuendo. Not developed much beyond their ludicrous names, Aitken’s 'hyper-privileged' characters stick to facile conversations and blithely accept the pecking order ... [then] a rhetorical about-face ... Aitken writes his characters as silly and, well, farcical. Even the deepest, Briony, develops but remains a comical figure. As such, they’re out of place as beaten slaves in a labour camp. And as gossamer things, they can’t support the weight of the story’s new sobriety.
Read Full Review >>
See All Reviews >>
SIMILAR BOOKS
Coming Soon

Fellowship Point
Alice Elliott Dark
Rave
What did you think of The Swells?
© LitHub | Privacy