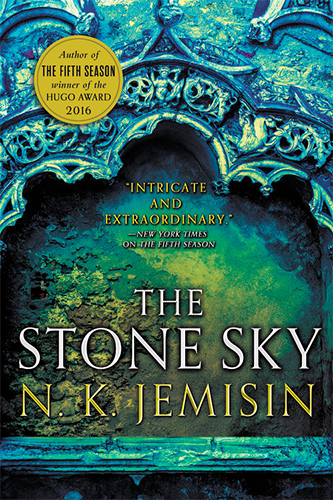 What The Reviewers Say
Rave Amal El-Mohtar,
NPR
...the fact that The Stone Sky sticks the landing of this astonishing trilogy with timeliness and rigor is the smallest, simplest thing I have to say about it. The gratitude and love I feel for these books, and for what The Stone Sky adds to the triptych, is staggering ... From a storytelling perspective, The Stone Sky satisfied me completely. With the same fiercely compelling voice and character work that made the first two volumes so eminently devourable, it travels deeply difficult terrain and emerges triumphant ... If the Broken Earth trilogy as a whole shows a world where cataclysm and upheaval is the norm, The Stone Sky interrogates what right worlds built on oppression and genocide have to exist ... I don't want to stop talking about this story. I don't want to count words. Let me leave it at this: The depth and breadth of Jemisin's achievement with this trilogy is geologic. These books are a revolution in which I want to take part.
Read Full Review >>
Rave Niall Alexander,
Tor
As the conclusion to a trilogy that started strong and then stopped, The Stone Sky gave me everything that I wanted, and then it gave me more. It’s devastating. Poignant and personal and almost impossibly powerful. If my faith in N. K. Jemisin as one of our generation’s most able creators was in any way shaken by The Obelisk Gate—and I confess that it was, somewhat—then The Stone Sky has decimated those doubts. The Broken Earth is in totality one of the great trilogies of our time, and if all is well with the world, its thoroughly thrilling third volume should surely secure N. K. Jemisin a third Hugo Award.
Read Full Review >>
Rave Andrew O'Hehir,
The New York Times Book Review
[Jemisin] burst on the epic fantasy scene with her earlier Inheritance trilogy (completed in 2011) and has pretty well conquered it with the Broken Earth ... Since the history of the Stillness is exceedingly complicated and each incident dense with important detail, The Stone Sky is not always easy reading. In this sense, Game of Thrones fans should feel at home: Yes, you need to read the earlier installments first and yes, rereading individual chapters (or the whole book) at a slower pace — after your first pell-mell rush through to find out what happens — is recommended ... Hoa or Houwha, a millennia-old stone eater who narrates much of this book to Essun from beyond 'the end of the world' (that’s honestly not a spoiler), tells her early on not to mourn the fall of an unjust society: 'Some worlds are built on a fault line of pain, held up by nightmares. Don’t lament when those worlds fall. Rage that they were built doomed in the first place.' Much later, after the spectacular final battle between mother and daughter, which only one can survive, he tells the victor that 'different choices have always been possible.' It’s a fitting moral to her story, and to all of our stories.
Read Full Review >>
See All Reviews >>
What did you think of The Stone Sky?
© LitHub | Privacy