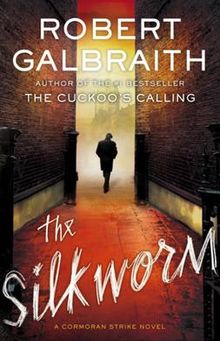 In the second book of the Cormoran Strike series, novelist Owen Quine is found brutally murdered after completing a manuscript featuring poisonous pen-portraits of almost everyone he knows.

What The Reviewers Say
Rave Daneet Steffens,
The Boston Globe
The case of murdered model Lula Landry, chronicled in 2013’s The Cuckoo’s Calling, raised Strike onto a level of fame, though things have calmed down somewhat, and ‘[s]trangers were once again doing what they had done most of his life: calling him some variation on ‘Cameron Strick.’ ’ Luckily, the glut of work flowing his way hasn’t slowed … Rowling weaves a pleasurably wicked literary murder mystery with all its attendant aspects of publishing politics, from the peevish to the pompous, into Strike’s personal and professional lives … While the gruesome mystery is both unnerving and good fun, the subtle but unmistakable heft in this book comes from the fact that we get more — though, tellingly enough, not all — of the regular characters’ back stories, quirks, and foibles.
Read Full Review >>
Rave Louis Bayard,
The Washington Post
Why is ‘likable’ the first word that comes to mind upon finishing The Silkworm? Surely, that has something to do with Rowling’s palpable pleasure in her newly chosen genre (the jig may be up with her Robert Galbraith pseudonym, but the bloom is still on her homicidal rose) and even more to do with her detective hero, who, at the risk of offending, is the second husband of every author’s dreams … This is the kind of traditional mystery in which motives and red herrings are dispensed in syringe-like doses from character to character and in which the guilty party stands obligingly in place while being walled around with deduction … Formula, though, has its function. The title of Owen Quine’s final novel is Latin for silkworm, a creature that, we learn in passing, is boiled alive for its silk. Rowling seems to offer this as a metaphor for the agonies of art.
Read Full Review >>
Positive Harlan Coben,
The New York Times Sunday Book Review
As written by Rowling, The Silkworm takes ‘write what you know’ and raises it to the 10th power. Is this crime fiction, a celebrity tell-all, juicy satire or all of the above? The blessing/curse here is that you turn the pages for the whodunit, but you never lose sight that these observations on the publishing world come from the very top. This makes complete escape, something mandatory for a crime novel, almost impossible — but then again, who cares? If you want a more complete escape, pick up another book. Reading Rowling on writing is delicious fun … The Silkworm is a very well-written, wonderfully entertaining take on the traditional British crime novel.
Read Full Review >>
See All Reviews >>
SIMILAR BOOKS
Fiction

The Lamplighters
Emma Stonex
Rave
What did you think of The Silkworm?
© LitHub | Privacy