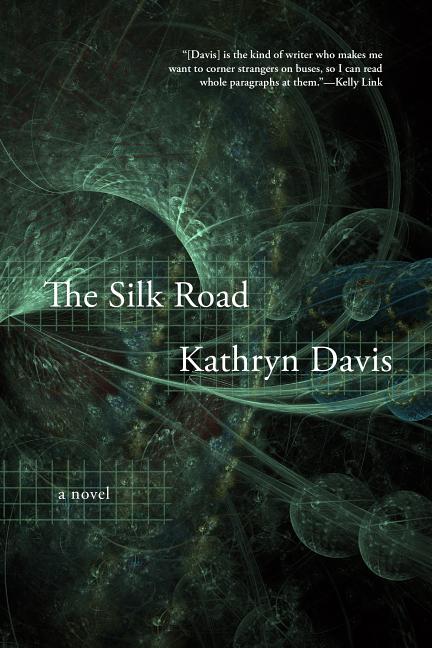 The Silk Road begins on a mat in yoga class, deep within a labyrinth on a settlement somewhere in the icy north, under the canny guidance of Jee Moon. When someone fails to arise from corpse pose, the Astronomer, the Archivist, the Botanist, the Keeper, the Topologist, the Geographer, the Iceman, and the Cook remember the paths that brought them there―paths on which they still seem to be traveling.

What The Reviewers Say
Rave Michelle Latiolais,
Los Angeles Review of Books
The Silk Road will be thought of as a difficult novel, a challenging read, and it might be wise to set aside any desire for palliative care and take up the raucous and demanding work of dying (or living) ... We forget to laugh with writers whose work scares us, or challenges us, or makes us heft up the huge Webster’s Third International onto the couch too many times because not even the internet is giving us a definition of that word—or not a good one, not with cognates...and there are passages in The Silk Road of great humor and delicious bawdiness ... The Silk Road is an act of profound and uproarious consciousness in the face of so much that is involuntary and inescapable: the workings and failings of our physical bodies ... The Silk Road is...a handhold in the flood of time, a not particularly sluggish eddy, but an eddy nonetheless: 'Swing low, Sweet chariot, Coming for to carry me home.' Go with the metaphors, entertain them all, that’s the life we have, language, our parole. That chariot ain’t here yet.
Read Full Review >>
Rave Anthony Domestico,
The Boston Globe
... gorgeous and confounding ... The Silk Road reads like a mystery novel at a slant ... [Reading the book feels like being] stretched and suspended over the abyss, jumping from one place (the labyrinth) to another (the Aubrac region of France), having the past folded into the present until you can’t tell them apart, seeing characters blend and blur ... Davis’s descriptive gifts are abundant ... Radiant and endlessly shifting, sensitive to outer form and inner reality, wildly and beautifully impenetrable: that’s as good a paraphrase of this splendid, poetic novel of ideas as you’ll get.
Read Full Review >>
Positive Nadja Spiegelman,
The New York Times Book Review
... even more metaphysical and experimental than [the author's previous works] ... The Silk Road merits being read twice, not because there is more joy to be found in the language once you know where the story is going but because there is something else to be found once you surrender to a journey without a destination ... Davis’s language has been compared to music, and though she can craft a lyrical sentence... much of the writing here reads more like an oblique spiritual handbook ... The Silk Road is unlikely to make its way onto any best-seller lists. And yet, for those willing to get lost in its spiritual haze, there is a uniquely un-2019 pleasure to be found: a meditative bewilderment that just might cede to enlightenment.
Read Full Review >>
See All Reviews >>
SIMILAR BOOKS
Fiction

The Deceptions
Jill Bialosky
Positive
What did you think of The Silk Road?
© LitHub | Privacy