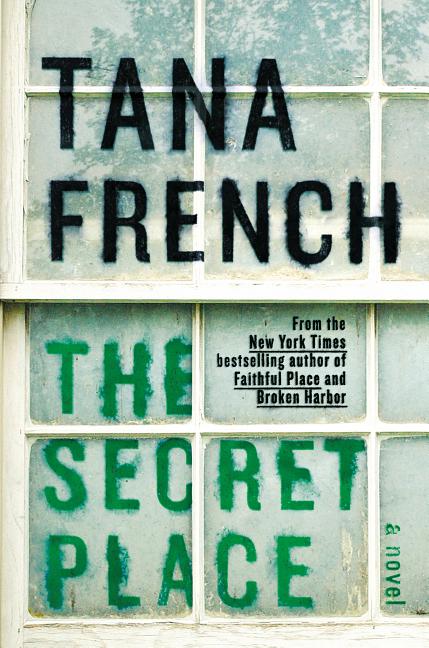 Detective Stephen Moran has been waiting for his chance to join Dublin’s Murder Squad when 16-year-old Holly Mackey arrives in his office with a photo of a popular boy whose body was found at a girls’ boarding school a year earlier. Stephen joins with Detective Antoinette Conway to reopen the case—beneath the watchful eye of Holly’s father, fellow detective Frank Mackey—and discovers an underworld of teenage girls that turns out to be more dangerous than the detectives imagined.

What The Reviewers Say
Rave Maureen Corrigan,
The Washington Post
The Secret Place, French’s fifth Dublin Murder Squad novel, pries open the hermetically sealed world of teenagers at a tony girls’ prep school and lets readers peer into the toxic stew of hormones and homicidal rivalries roiling within ... French is exquisitely sensitive to the look and manner of mean girls: the mocking stares, the whisper campaigns, the delicate skill with which cliques eviscerate the outsider ... The Secret Place is another eerie triumph for French. By story’s end, she simultaneously makes you wistful for the galloping intensity of lost adolescence and grateful to leave the confines of St. Kilda’s with mind and body intact.
Read Full Review >>
Rave Laura Wilson,
The Guardian (UK)
The characterization of the girls is particularly strong: all the manufactured attitude, intense loyalty, harsh judgment and vying for alpha status with a rival clique in the way that only adolescent girls can. Joanne Heffernan, a rival clique's queen bee—dealing out casual humiliation even to her acolytes and claiming virtual, if not actual, droit du seigneur over any boy she fancies—is an absolute masterpiece of vulnerable cruelty. Here...the incessant and often vicious jockeying for position is described with such appalling accuracy as to leave this reviewer practically weeping with gratitude that she is no longer a teenager. As well as divides of age and class, French handles the gender clashes superbly ... The Secret Place isn't a speed read. It's on the long side, and could have benefited from some editorial fat-trimming in places, but it's enjoyably well written and the winning combination of intricate plotting and psychological depth means that the reader's patience will be amply rewarded.
Read Full Review >>
Mixed Laura Miller,
The New Yorker
French’s fifth and least successful novel ... The novel’s emotional center is diffused, and it loses the tense, marvelous effect of French’s other books, in which the scrim of a faltering narrator makes it impossible to ascertain whether the supernatural elements are real or merely a manifestation of the detective’s psychic distress. The girls’ witchy exploits are a thin pop-culture borrowing, and teen-agers are so protean to begin with that their identity crises lack the power to unnerve.
Read Full Review >>
See All Reviews >>
SIMILAR BOOKS
Fiction

The Preserve
Ariel S Winter
Positive
What did you think of The Secret Place?
© LitHub | Privacy