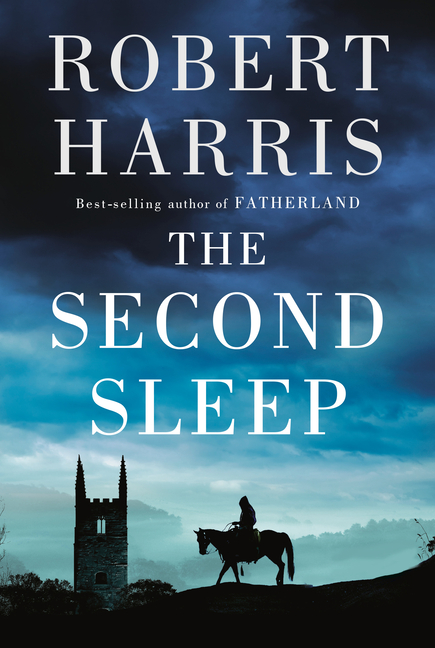 1468. A young priest, Christopher Fairfax, arrives in a remote Exmoor village to conduct the funeral of his predecessor. The land around is strewn with ancient artefacts—coins, fragments of glass, human bones—which the old parson used to collect. Did his obsession with the past lead to his death? Fairfax becomes determined to discover the truth. Over the course of the next six days, everything he believes—about himself, his faith, and the history of his world—will be tested to destruction.

What The Reviewers Say
Rave Clare Clark,
The Guardian (UK)
During the course of his career Harris has perfected the art of creating tension within a story to which we already know the ending ... In The Second Sleep he turns the tables: this time we do not know the beginning ... The stage seems set for a classic Harris thriller, the lowly functionary intent on challenging the entrenched interests of a secretive and ruthless state. Instead The Second Sleep develops into something more contemplative: an exploration of a world that is both unfamiliar and as old as time, and of the consequences of our flagrant disregard for the existential perils of our own era. A convincingly imagined future world requires a steady accretion of small, telling details and there are sections in Harris’s novel that feel frustratingly inconsistent or approximate. But if his dystopia lacks the political and social coherence of, say, Gilead in The Handmaid’s Tale, he has contrived in The Second Sleep to do something rather brilliant and new. He has put us at the heart of the mystery. Whatever disaster has struck the world it has struck because of us, our greed and ambition, our arrogance. We are all responsible. As Fairfax edges closer to the truth, the reader is left with at least as many questions as answers, and most of those questions are directed at ourselves.
Read Full Review >>
Rave William Skidelsky,
Financial Times
The Second Sleep won’t seem entirely new to Harris fans. Its plot, at times, strongly resembles Fatherland, which also hinged on its protagonist uncovering dangerous repressed truths about the past. But this sense of familiarity doesn’t matter. When Harris is at his best — and here he is — he writes with a skill and ingenuity that few other novelists can match. In this case, the usual page-turning pleasures are joined by something else: a sense that, through his historical-futuristic setting, Harris has found a unique vantage point to comment on the present. At first, he seems to be asking too much of his readers. That our civilisation could collapse seems entirely plausible, but would all its accumulated knowhow vanish with it? And would society then revert to something so closely resembling the Middle Ages? Harris’s cleverness is to make this scenario believable ... It is positively alarming, the ease with which Harris conjures up a future in which our virtual world, powered by a shadowy force known as electricity, comes to seem like the definition of hubris. This is a novel that not only makes you smile at its author’s brilliance, but induces a shiver of dread at how real it all seems.
Read Full Review >>
Mixed Nicola Griffith,
The New York Times Book Review
As a novelist, Robert Harris has a gift of immersing readers in an unfamiliar milieu, and thrilling them with the subsequent emotional, physical and ethical challenges faced by the protagonist as he (and it is always he) navigates mounting obstacles to a supposedly routine task — and, in the process, unearths unexpected truths ... Harris seems to be saying that churches, with their enduring stone buildings, would make natural nexus points for the survivors. And this is where readers familiar with ruined-earth novels and their rigorous logical extrapolation might begin to have difficulties ... why, of the vast multicultural population of pre-apocalyptic Britain, only straight, white, able-bodied people appear to have survived ... there is a surprising lack of narrative tension, the internal inconsistencies are confounding and we have guessed the denouement long before it arrives. In the end, even Harris seems to give up, and all fades to black in a shower of cold, wet dirt.
Read Full Review >>
See All Reviews >>
SIMILAR BOOKS
Fiction

Hummingbird Salamander
Jeff VanderMeer
Rave
What did you think of The Second Sleep?
© LitHub | Privacy