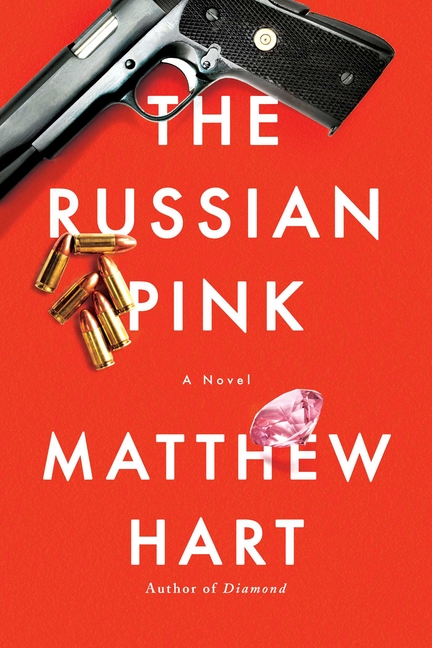 A journalist who has reported on the diamond industry offers a fictional take on the darker side of the trade in this debut featuring Alex Turner, a Treasury Department investigator and former C.I.A. agent. When a pink gem turns up on the neck of Honey Li, the wife of surging presidential candidate Harry Nash, Turner has to find out why a mysterious Russian double agent betrayed him.

What The Reviewers Say
Rave Rochelle O’Gorman,
Christian Science Monitor
Well, the characters in Matthew Hart’s new thriller The Russian Pink will lie, cheat, and kill to get their hands on precious gems, proving, as Hart warns, that 'All diamonds are blood diamonds.' ... It’s no surprise that the information about gems that he includes in the story is not only accurate, but fascinating. When Hart delves into governmental black ops maneuvers and under-the-table deals, The Russian Pink reads like a well-written thriller. But it’s when Hart describes diamonds that he is at his best ... There are times when Hart’s descriptions veer into overblown imagery, which slows the action. He is most effective when unspooling his brilliant, conniving, complex cast of characters. If there is to be a sequel, one hopes these characters return and are pushed to the forefront. As much as this novel is about action and adventure, it’s the personalities that keep you reading.
Read Full Review >>
Rave Elyse Discher,
BookPage
Matthew Hart’s debut thriller, The Russian Pink, feels especially timely given its subject matter: a fraught presidential election and a Russian conspiracy ... This novel plays out like an action movie, fast-paced and globe-trotting from New York City to Antwerp to South Africa. Hart’s compelling hero isn’t afraid to resort to violence, and we see him engaging in everything from sword fights to falling off the balcony of a skyscraper’s penthouse. There’s also a dash of romance to temper the action scenes. The Russian Pink is a fast read, never once allowing the reader to catch their breath. Perfect for fans of Robert Ludlum and David Baldacci, this thriller will have readers anxiously awaiting Hart’s next novel.
Read Full Review >>
Rave Jane Murphy,
Booklist
... an adrenaline-fueled attempt to unravel the web of lies and betrayals behind a conspiracy that threatens the survival of the free world ... This book is a rare gem, punning aside. It will enthrall fans of Jack Ryan and Jason Bourne, and leave them hoping for more Alex Turner.
Read Full Review >>
See All Reviews >>
SIMILAR BOOKS
Fiction

A Will to Kill
Rv Raman
Positive
What did you think of The Russian Pink?
© LitHub | Privacy