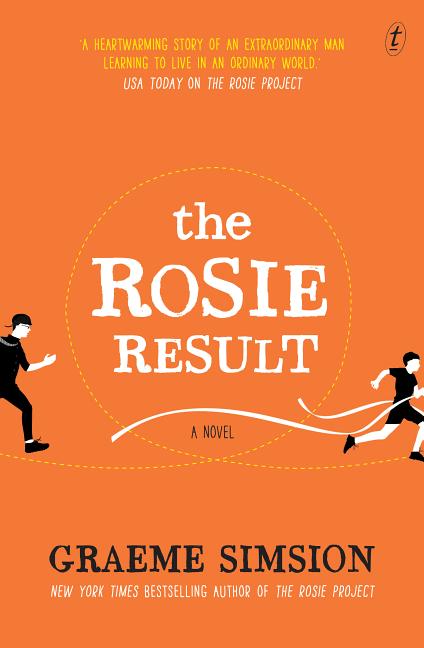 Don Tillman and Rosie Jarman are about to face their most important challenge. Their eleven-year-old son, Hudson, is struggling at school: he’s socially awkward and not fitting in. Don’s spent a lifetime trying to fit in―so who better to teach Hudson the skills he needs?

What The Reviewers Say
Rave Clémence Michallon,
The Independent
Simsion delivers a brave attempt at asking important questions without compromising his characters’ respective journeys, nor losing his trademark mix of humour and emotion ... In a welcome change of direction, Simsion makes autism the central theme of The Rosie Result ... because Simsion is a gifted plotter...those narratives interlink, bringing us on a fast-paced, enjoyable journey. Don has become a profoundly likeable protagonist, and it’s a joy to watch him grow ... Rosie is now a realistic, fully fledged character ... The resolution feels earned and genuinely heartwarming. It’s fascinating to see how the portrayal of Don and his family has evolved over the years, and while Simsion’s cast of characters will be missed, he is certainly ending on a high note.
Read Full Review >>
Positive Heller McAlpin,
NPR
...the social objective of The Rosie Result is clear from the outset: to dispel all-too-common misconceptions and prejudices about what it means to be 'on the spectrum' ... Simsion's goal is laudable, and this book thoughtfully addresses the advantages and disadvantages of formal diagnosis ... Simsion's message of inclusiveness and embracing differences is lovely. But while this final installment may well educate readers outside that circle, it's less likely to charm them. It plods along to its heartwarming climax, generally more earnest than amusing.
Read Full Review >>
Rave Jaclyn Fulwood,
Shelf Awareness
[Simsion] grants Professor Don Tillman the perfect send-off in the closing chapter of this hilarious and heartwarming series ... Simsion returns to comic form seamlessly ... newcomers should have no trouble following the action. A meditation on parenting in our times, an indictment of discrimination and a fond farewell to a one-of-a-kind character, The Rosie Result will make readers fall in love with the series all over again.
Read Full Review >>
See All Reviews >>
SIMILAR BOOKS
Fiction

The Book of Two Ways
Jodi Picoult
Mixed
What did you think of The Rosie Result?
© LitHub | Privacy