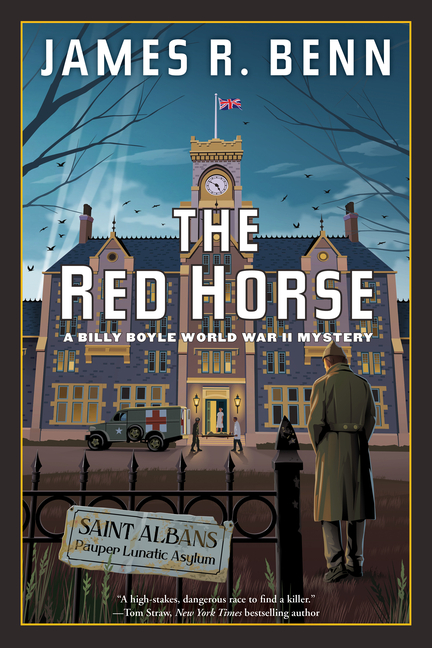 England, 1944: Recovering from physical and psychological wounds sustained in the liberation of Paris, US Army detective Billy Boyle and Lieutenant Kazimierz are sent to a convalescent hospital in the English countryside--only to discover that St. Albans may have its own war secrets, including a killer. In this historical mystery, Billy must carry out his covert investigation while maintaining his tenuous recovery, shielding his actions from suspicious hospital authorities, and dodging the unknown murderer.

What The Reviewers Say
Rave Irma Heldman,
Open Letters Review
This is high octane suspense. What starts in a sanatorium leads to a desperately dangerous race to find a killer ... chilling echoes of One Flew over the Cuckoo’s Nest and The Prisoner reverberate in every twist and turn of Billy Boyle’s life or death mission ... With consummate skill, Benn weaves a compelling variation on a locked-room mystery into a detail-rich novel whose high level of tension never lets up ... The Red Horse is right up there with the best classic mysteries. In other words, a winner!
Read Full Review >>
Rave Kirkus
Did the drowsy patient fall from the clock tower, did he jump, or was he pushed? ... The multilayered plot leaves the asylum grounds to follow the exploits of the Special Operations Executive as well as the eponymous resistance group and a possible link to some at Saint Albans. Benn's latest caper has fascinating historical roots and nicely balances action and investigation.
Read Full Review >>
Rave Publishers Weekly
Set in 1944, Benn’s superlative 15th WWII mystery featuring U.S. Army investigator Billy Boyle (after 2019’s When Hell Struck Twelve) finds Boyle confined to a former lunatic asylum converted to a hospital outside London, where he’s recovering from a traumatic experience ... Benn maintains a high level of tension throughout, and his admirable but flawed lead will engage even first-time readers. This fair-play whodunit stands comparison with the best classic mysteries.
Read Full Review >>
See All Reviews >>
SIMILAR BOOKS
Fiction

The Maid
Nita Prose
Positive
What did you think of The Red Horse?
© LitHub | Privacy