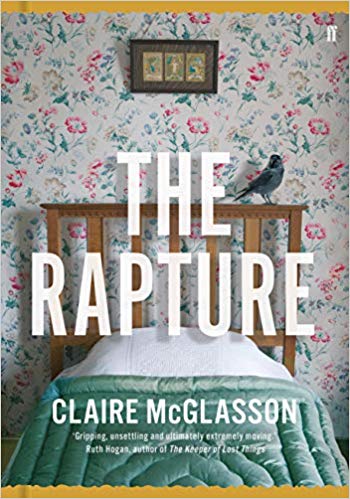 Dilys is a devoted member of The Panacea Society, a cult populated almost entirely by virtuous single ladies. But Dilys is wary of the leader's zealotry, particularly as her feelings for a new recruit named Grace begin to bud and bloom.

What The Reviewers Say
Rave Alastair Mabbott,
The Herald (UK)
The Rapture spins a hugely engaging story ... McGlasson enthrals in this powerful, page-turning novel in which a spiritual community is brought down to earth by secrecy and worldly power games, while the most transcendent moments are to be found in ambiguous, dreamlike passages of forbidden sensuality.
Read Full Review >>
Positive Matt Rowland Hill,
The Guardian (UK)
The Rapture is perceptive about the ways in which earthly longing can be refracted into religious excitement, as a magnifying glass focuses sunlight. The Society helps channel and tame its members’ sexual passion, their grief over husbands and brothers lost in the war, and their unarticulated political frustration (first-wave feminism has barely made a splash in their lives). McGlasson weaves these threads together skilfully, creating a wise and entertaining novel about the way we break open the boxes sealed inside ourselves.
Read Full Review >>
Mixed Ann Treneman,
The Times (UK)
I feel for Dilys ... However, McGlasson also expects Dilys to fulfil the function of 'cult tour guide' for us. All the heavy lifting of this novel rests on her slender frame and, at times, she is simply not up to it ... I suspect that...the factual bedrock also inhibited McGlasson when it came to the plot and composition. The writing can be overly formal and, at times, downright opaque. Characters disappear abruptly, others are far too sketchy. The ending feels particularly patchy and unsatisfying. I wanted to know more, but that in itself is a sign of how fascinating this book is—and, as a debut, it is impressive.
Read Full Review >>
See All Reviews >>
SIMILAR BOOKS
Coming Soon

A Trail of Crab Tracks
Patrice Nganang
Positive
What did you think of The Rapture?
© LitHub | Privacy