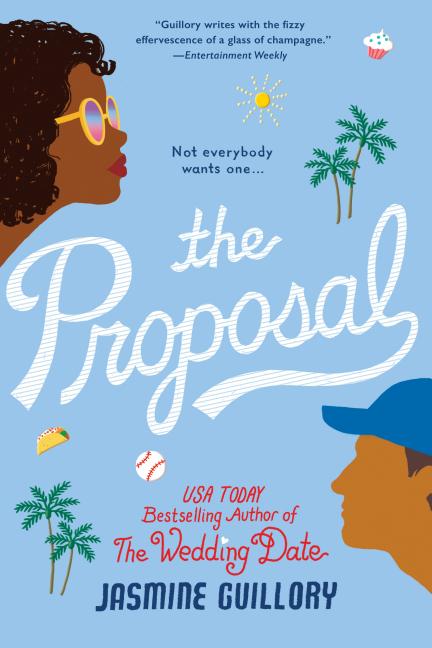 After a disastrous and highly public proposal gone wrong, a no-nonsense freelance writer rebounds with her knight in shining armor.

What The Reviewers Say
Rave Kamrun Nesa,
NPR
The Proposal knocks it out of the ballpark, pun intended in this case ... Rollicking, charming, and infinitely zesty, The Proposal packs all the feel-good punch of a rom-com, with a weighty kick of gravitas around dating issues, loss, and male privilege. It's vibrantly diverse, from the characters to the food they love and the world they live in. Ultimately, The Proposal magnifies Guillory's delightful voice, showcases her sharp, invigorating wit, and keeps her considerable momentum going strong.
Read Full Review >>
Rave Susan Maguire,
Booklist
Writer Nik Paterson is, reluctantly, attending a Dodgers game with her model-actor boyfriend when suddenly her name, spelled wrong, is on the Jumbotron and he’s down on one knee. A stadium full of people witness her rejection of the proposal, but only Carlos, a doctor, and his sister, Angie, come to her rescue, pretending to be old friends and whisking her away from the descending photographers ... Full of warmth, quick banter, girlfriend group-texts, and food—so much good food!
Read Full Review >>
Positive Moira Macdonald,
The Seattle Times
... a straight-up contemporary romance that’s as likable as it’s unsurprising ... a novel that’s the book equivalent of a movie rom-com: light, sweet, enjoyably uncomplicated. You know exactly how things are going to work out, and they do, because that’s how rom-coms work. But the real pleasure here is the little world Guillory has created...
Read Full Review >>
See All Reviews >>
SIMILAR BOOKS
Fiction

How to Fail at Flirting
Denise Williams
Positive
What did you think of The Proposal?
© LitHub | Privacy