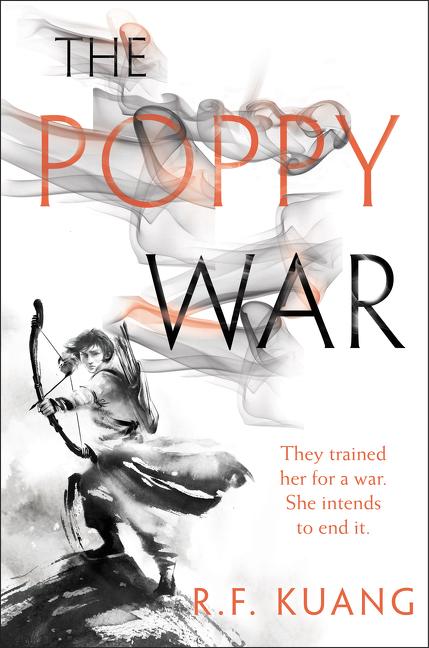 The Poppy War is an epic historical military fantasy, inspired by the bloody history of China’s twentieth century and filled with treachery and magic, in the tradition of Ken Liu’s Grace of Kings and N.K. Jemisin’s Inheritance Trilogy.

What The Reviewers Say
Rave Everdeen Mason,
The Washington Post
R.F. Kuang’s debut novel, The Poppy War (Harper Voyager), is a study in every kind of violence. The humor is a bitter laugh, the lessons bruising ... The book starts as an epic bildungsroman, and just when you think it can’t get any darker, it does. Its Chinese influences and female character will garner comparisons to Mulan, but that’s a cheap thread. Kuang pulls from East Asian history, including the brutality of the Second Sino-Japanese war, to weave a wholly unique experience.
Read Full Review >>
Positive Chris Pickens,
BookPage
R.F. Kuang must first be congratulated on seamlessly drawing on and then reshaping Chinese history as influence for the world Rin [the protagonist] inhabits ... Her tenacity, stubbornness and insecurity are instantly sympathetic and Kuang’s attention to Rin’s feelings opens up oceans of emotional depth ... It would be a thrill to see Rin, fresh from the crucible of The Poppy War, on the pages of a sequel novel.
Read Full Review >>
Positive Michael Nam,
New York Daily News
Kuang ambitiously begins a trilogy that doesn't shy away from the darkest sides of her characters wrapped in a confectionery of high-fantasy pulp ... Frankly, it's also just wonderful to have more genre stories told through an Asian cultural tableau. The future of Rin in this world may appear quite dark, but that of the series seems bright indeed.
Read Full Review >>
See All Reviews >>
SIMILAR BOOKS
Fantasy

A Marvellous Light
Freya Marske
Rave
What did you think of The Poppy War?
© LitHub | Privacy