The Pope and Mussolini: The Secret History of Pius XI and the Rise of Fascism in Europe 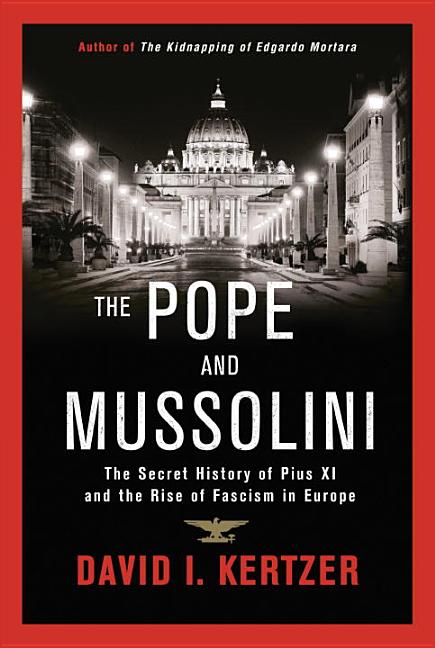 This Pulitzer Prize-winning biography reveals the extent of Pope Pius XI’s relations with Italian dictator Benito Mussolini. In a challenge to the conventional history of this period, in which a heroic Church does battle with the Fascist regime, Kertzer shows how Pius XI played a crucial role in making Mussolini’s dictatorship possible and keeping him in power in exchange for restored Church privileges.

What The Reviewers Say
Rave Lucy Hughes-Hallett,
The Guardian
[Kertzer's] argument, presented not as polemic but as gripping storytelling, is that much of fascist ideology was inspired by Catholic tradition—the authoritarianism, the intolerance of opposition and the profound suspicion of the Jews ... From the copious records of their exchanges Kertzer has uncovered a fascinating tale of two irascible—and often irrational—potentates, and gives us an account of some murky intellectual finagling, and an often startling investigation of the exercise of power ... Avoiding overt partisanship, Kertzer coolly lays out the evidence; he describes his large and various cast of characters, and follows their machinations ... a book whose narrative strength is as impressive as its moral subtlety.
Read Full Review >>
Rave David D'Arcy,
San Francisco Chronicle
... captivating ... The pomp and shadowy intrigue of The Pope and Mussolini—reports from Mussolini's network of spies in the Vatican have also come to light—is a grim update on Machiavelli. Any publisher's marketing department will try to peddle this as the real Da Vinci Code—only it's rigorously documented and far less implausible.
Read Full Review >>
Rave Matt Damsker,
USA Today
... vividly recounted history ... Kertzer had access to recently opened Vatican archives regarding Pius XI, and his thorough research goes a long way in overturning conventional notions about Catholic church resistance to Mussolini. If anything, it's a tragic story of a pope's too-late realization that Hitler's and Mussolini's pagan tide of anti-Semitism had drowned any rationale for church support.
Read Full Review >>
See All Reviews >>
What did you think of The Pope and Mussolini: The Secret History of Pius XI and the Rise of Fascism in Europe?
© LitHub | Privacy