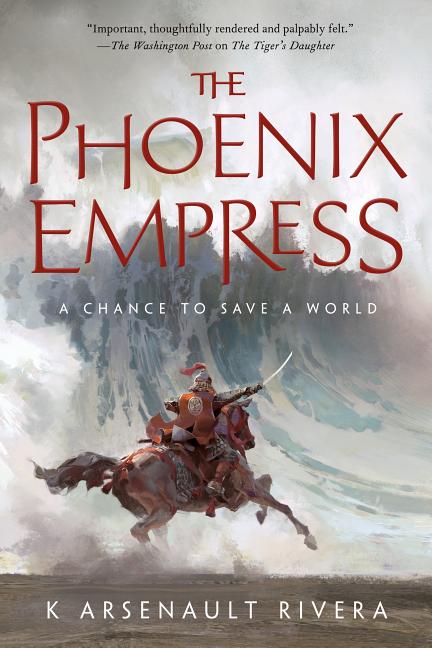 K Arsenault Rivera's second novel, The Phoenix Empress, is the continuation of a new epic fantasy trilogy. As the Imperial Army gathers against a demonic invasion, Shizuka must do all she can with an empire on the brink of civil war.

What The Reviewers Say
Rave McKenzie Tozan,
Bookpage
The restrained, visually evocative world building of The Tiger’s Daughter is continued here. Many of the animals witnessed in this series are unique combinations of the animals we see in our own landscapes, enriching Rivera’s fictional world and keeping the reader grounded. But perhaps the most impressive aspect of the book is Rivera’s prose, and her willingness to question the reliability of one of her narrators. Shefali has been seeing ghosts since the first book, and not only does this give the reader the opportunity to enjoy Rivera’s grisly renderings of the afterlife, but it also complicates the marriage at the heart of the series ... The sequel to K. Arsenault Rivera’s acclaimed fantasy debut, The Phoenix Empress is a superlative example of what fantasy is capable of ... The Phoenix Empress is a tremendous achievement, and highly recommended.
Read Full Review >>
Rave Emily Borsa,
Booklist
The sweeping, lush love story between the Qorin warrior Shefali and the warrior empress Shizuka continues ... Together, they have to protect their people (and themselves) from impending magical doom ... Rivera captures the feelings of spouses learning each other’s secrets, and learning to forgive. This lengthy and detailed read that depicts what love can conquer builds toward the final installment in the series.
Read Full Review >>
Mixed Bill Capossere,
Fantasy Literature
The novel starts slowly, and I almost gave it up several times in the first 100-150 pages...but things did pick up at about the halfway point as Shizuka moves more into the story of her being forced into the role of General by her uncle, tasked with leading what her uncle hoped would be a suicidal march into the north against land controlled by demons ... Beyond plot, character, and pacing, I had mixed feelings about the worldbuilding. On the one hand, I quite like the mythology that underlies much of the story even if it still feels a bit amorphous. The question of cycles of gods and demons and ascendancy may actually be the most interesting facet for me at this point. I still don’t find either story as told or the characters as presented particularly compelling, while pacing, POV, structure, and the over-wrought romance elements have been obstacles more often than not. But Rivera can turn a sweet phrase, offering some lovely single lines or segments of description. At this point, I wouldn’t recommend the Thier Bright Ascendacy series, having not liked The Tiger’s Daughter at all and having only a middling response to this one.
Read Full Review >>
See All Reviews >>
SIMILAR BOOKS
Fantasy

40
Alan Heathcock
Positive
What did you think of The Phoenix Empress?
© LitHub | Privacy