The Perilous Adventures of the Cowboy King: A Novel of Teddy Roosevelt and His Times 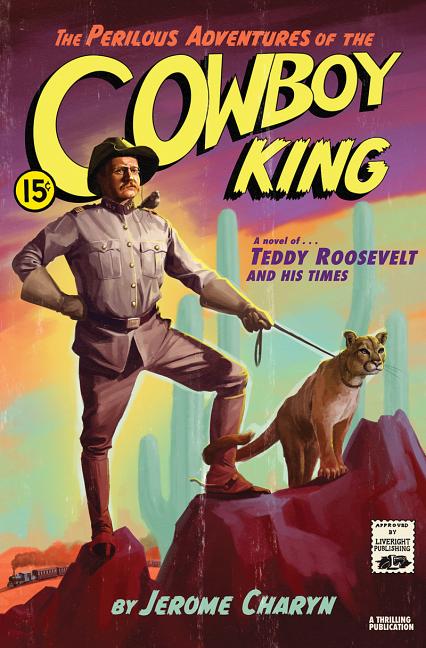 What The Reviewers Say
Rave Ron Charles,
The Washington Post
Now in his 80s, [Charyn] seems ever more daring ... Charyn has found a path all his own — neither a substitute for biography nor a violation of it ... For fans of Roosevelt, this is tremendous fun. But readers unfamiliar with his life and the political history of the late 19th century should be forewarned: There will be no coddling on this breakneck tour. The five dozen names listed in the novel’s dramatis personae offer a handy guide to who’s who, but those terse descriptions will hardly bring the uninitiated up to speed ... [the front cover] strikes just the right tone, as does this delightful novel.
Read Full Review >>
Positive Toni V. Sweeney,
New York Journal of Books
This fictional biography, as narrated by the subject himself, has the fascinating flavor of those infamous but sought-after 19th century dime novels ... With an included Cast of Characters—and what characters they are!—listing almost everyone mentioned in the novel, and authentic archival photographs, The Perilous Adventures of the Cowboy King would be a rousing tale of adventure even if it wasn’t based on fact.
Read Full Review >>
Positive Gerard Helferich,
The Wall Street Journal
... the novel’s tongue-in-cheek title and comic-book dust jacket also give fair warning of Mr. Charyn’s intent. The author doesn’t mean to lampoon his subject but to convert him into an action hero worthy of the dime novels and 'Boy’s Own' stories popular during [Roosevelt's] time ... With Cowboy King [Charyn] has done his homework, and his account generally honors the historical record. The novel is also graced with vivid, vigorous writing ... Yet despite the first-person narration, it isn’t always easy to hear Roosevelt’s voice through Mr. Charyn’s phrasings ... [Charyn] has written the rousing yarn advertised in his title and dust jacket, and he has written it well. Maybe it’s unfair to wish that the hero had been rendered in all his three-dimensional glory. But sometimes portraying a figure larger than life serves not to magnify but to diminish.
Read Full Review >>
See All Reviews >>
SIMILAR BOOKS
Coming Soon

The Forger's Daughter
Bradford Morrow
Rave
What did you think of The Perilous Adventures of the Cowboy King: A Novel of Teddy Roosevelt and His Times?
© LitHub | Privacy