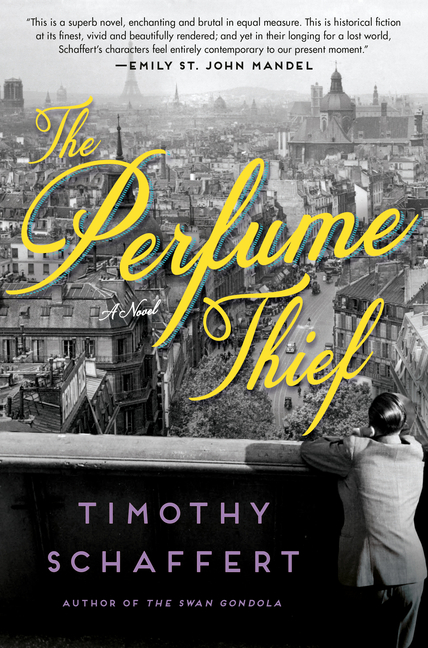 Set in Paris on the eve of World War II, Clementine, a queer American ex-pat and notorious thief, is drawn out of retirement and into one last scam when the Nazis invade.

What The Reviewers Say
Rave Chika Gujarathi,
BookPage
Timothy Schaffert’s sixth novel has so much going for it that it’s hard to pinpoint only a few reasons why you will love it, but let us try nonetheless ... It’s a thrill to be in Clem’s mind, to follow along as she sinks deeper and deeper into this mystery, as she worries about how to keep her loved ones safe ... With a healthy dose of romance, fashion and espionage and a glimpse of the lives of openly queer artists under Nazi occupation, The Perfume Thief is a reminder that Paris, even in the pages of a book, always makes for a great escape.
Read Full Review >>
Positive Monica Carter,
Lambda Literary
... a vivid and striking story ... Through Clem’s perspective, the novel evokes a tapestry of smells and their obscure origins. Paris is wistfully recalled through the scents of each character’s freedom before the war. As secrets and truths are revealed of all, the destiny of each character—and the choices they make—cause reverberations in the lives of the others ... Small acts of bravery during the Resistance may be less known, but this novel gives imagination to the courage of queer lives during the Occupation. Clem embodies the wisdom of a fully-rendered life, filled with deception, compassion, and transformation. A luminous character invented to populate the queer history that was lost. Once she’s allowed herself to love others, she deceives one last time for those she loves.
Read Full Review >>
Pan Bree Jennrich kirkwood,
Library Journal
The volume of research that went into creating Clem’s world is apparent in the novel’s little factual details, like the subcutaneous perfume craze and mentions of the ties between perfume and chemical warfare. In spite of the amount of research and thought Schaffert put into his novel, it disappoints overall. For a book focused on perfume, the sensory descriptions are too few and far between ... While the concept, the characters, and the well-researched details of the setting are intriguing, the plot drags, resulting in an underwhelming read.
Read Full Review >>
See All Reviews >>
SIMILAR BOOKS
Fantasy

The Falcon's Eyes
Francesca Stanfill
Positive
What did you think of The Perfume Thief?
© LitHub | Privacy