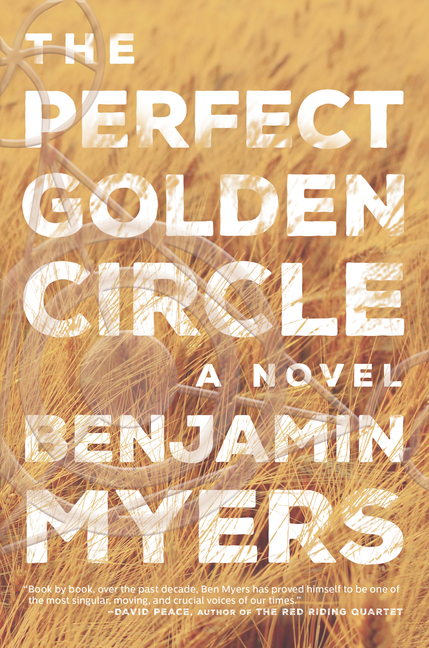 A novel about the futility of war, the destruction of the English countryside, class inequality, power of beauty to heal trauma and fight power.

What The Reviewers Say
Rave Hephzibah Anderson,
The Guardian (UK)
Benjamin Myers's latest novel, The Perfect Golden Circle, is every bit as idiosyncratic as its subject matter, combining lyricism with comedy and themes that range from warfare and environmental calamity to hope and healing...It centres on the creators of the crop circles, quintessential odd couple Redbone and Calvert...Like the characters in the author’s previous work, which spans historical fiction and rural noir, and includes the 2021 short story collection Male Tears, these men are outsiders...While Redbone lives in an old camper van, is immersed in the crust punk scene and prone to visions hallucinogenic and otherwise, Calvert is a solitary SAS veteran, battle scarred inwardly as well as outwardly from his service in the Falklands...Bathed in moonlight, Myers’s land thrums with more ancient reverberations, too...There is, he writes, 'an under-England, a chthonic place of hidden rivers and buried relics', of the bones of extinct animals and battle-slain bodies...His main characters are acutely aware of it – their industry, it’s hinted, flows from it – and the humbling sense of perspective this confers is balm and inspiration...The novel’s title derives from a conversation between the men...As Redbone explains, there is no such thing as a truly perfect circle, it 'can only ever exist as an idea'. Which means, he adds, 'that we each carry one within us'...The notion neatly encapsulates the generosity of Myers’s magnetic novel, which brings together ingredients as diverse as folk song, Gaia theory and trauma, grounding them all in a memorable hymn to beauty.
Read Full Review >>
Rave Sam Sacks,
Wall Street Journal
Myers's duo of crop circlers consists of Redbone, a 'crust-punk' hippie who dreams up increasingly complex geometric patterns, and Calvert, a severely traumatized veteran of the Falklands War who does the legwork of finding usable fields...The odd couple is united by a complementary hatred of England and love of its land and roots...Begun as a lark, the crop circles provide them a lifeline...Their shared code is to 'fuel the myth and strive for beauty'...The contrasting public and private aspects of the stunt are shown in parallel...In the background, through invented newspaper clippings, we read of the growing media sensation surrounding the crop circles, the mass pilgrimages by UFO-spotters, and the farmers who make a mint charging for access...But Mr. Myers focuses more on the creative act itself...The chapters chronicle each midnight mission in the fields, depicting both the challenge to remain undiscovered and the illicit thrill of completion...Anonymity and secrecy are key to the work but also a source of deep melancholy, and the novel uncovers a plaintive connection between artistic transcendence and personal loneliness...The controversies attached to crop circles ultimately fade out behind the touching individual quests for meaning...'The next one is always a beacon,' the outcast artists think, 'beaming hope across the strange and haunted landscapes of their solitary existences.'
Read Full Review >>
Mixed Margie Orford,
The Spectator
The Perfect Golden Circle is ostensibly about male friendship...Two men, flotsam of the 1980s – Calvert, a Falklands veteran, and Redbone, a failed punk musician – tramp across the English countryside in 1989 making crop circles...How these outcasts met, or what drew them to each other apart from poor personal hygiene, is never made clear...Like two feral Hobbits, they rattle about the dystopian and degraded shires of an England in the death throes of the Thatcher era, making ever more elaborate crop circles...It all reads a bit like a lockdown fever dream and there are flashes of intensely beautiful descriptions of the fast disappearing natural world...Why the men hang out together, or what has set them traipsing around fields on moonlit nights, is not made clear because neither is articulate...Theirs is ‘a friendship based on things largely left unseen and unsaid’...But they are not inarticulate in the illuminating ways in which Beckett’s tramps and misfits are, and so the result for this reader was one of intense irritation...The bond between these two – the why, the where, the how they met – is nowhere to be found, leaving an unsatisfying emotional lacuna at the heart of the book.
Read Full Review >>
See All Reviews >>
SIMILAR BOOKS
Fiction

This Other Eden
Paul Harding
Rave
What did you think of The Perfect Golden Circle?
© LitHub | Privacy