The People of Forever Are Not Afraid 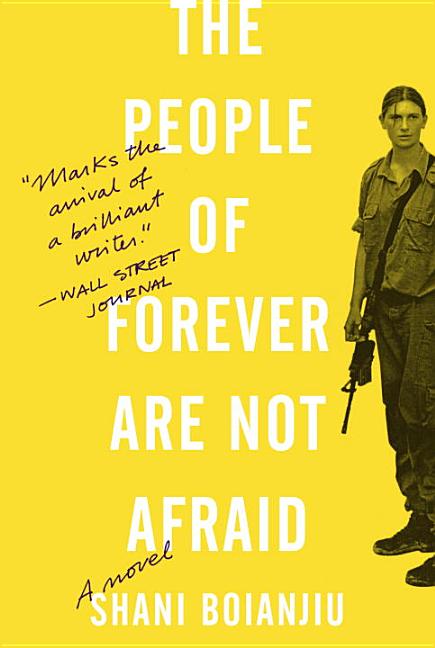 Yael, Avishag, and Lea grow up together in a tiny, dusty Israeli village, attending a high school made up of caravan classrooms, passing notes to each other to alleviate the universal boredom of teenage life. When they are conscripted into the army, their lives change in unpredictable ways, influencing the women they become and the friendship that they struggle to sustain.

What The Reviewers Say
Rave E.J. Levy,
The Washington Post
Boianjiu’s prose has a flat, harsh glare that can seem benumbing at first but evokes the deadening that comes of constant war. Part of this impressive book’s power is that it manages to re-create and rupture that numbness, war’s tedium and the damage it does to memory, intimacy, thought and affection ... Among the book’s subtle insights is that the greatest intimacy forged by war is with those one fights ... The novel repeatedly changes point of view — from first-person singular, to first-person plural, to third — as if trying to get at the truth of the conflict. Characters’ voices are sometimes indistinguishable, requiring clumsy devices to signal shifts, but the sensibilities are revealing in their range ... Boianjiu’s bracing honesty is tonic ... A fierce and beautiful portrait of the damage done by war.
Read Full Review >>
Positive ALAN CHEUSE,
NPR
Boianjiu works in simple, direct prose, with which she gives us the frustrations and annoyances of military service — as when the recruits have to leave the female dorm early in the morning to head for a checkpoint ... Exhibitionism, sexual fantasies, slack attitudes toward regulations — not much war here in these pages, just small doses of bad behavior on both sides of the line, and nearly 350 pages of frank and episodic scenes about female life in the IDF, which by midway through the book begin to lose their charm ... The frankness in the novel is refreshing, the episodic nature of its progress I found wanting.
Read Full Review >>
Mixed Rachel Shabi,
The Guardian (UK)
The book has that contradictory impulse of much army fiction, in which compulsory military service is depicted as brutalising a nation's young adults (what it does to those living under military occupation is not in the frame), as well as an elevating rites-of-passage ... Initially the prose seems charmingly stilted, but soon it starts to grate like a bad translation. That's when you wish that the author had had a less indulgent editor, because there is so much good writing here: memorable detail and sharp storytelling that often gets lost amid the bad metaphors and narrative drag ... The parts that stand out are surreal comic set pieces in the vein of Catch-22 ... The narrative feels more like a succession of vignettes – it isn't strong enough to make me care about the characters, or carry the book through to its end.
Read Full Review >>
See All Reviews >>
SIMILAR BOOKS
Fiction

This Other Eden
Paul Harding
Rave
What did you think of The People of Forever Are Not Afraid?
© LitHub | Privacy