The Penguin Book of Hell 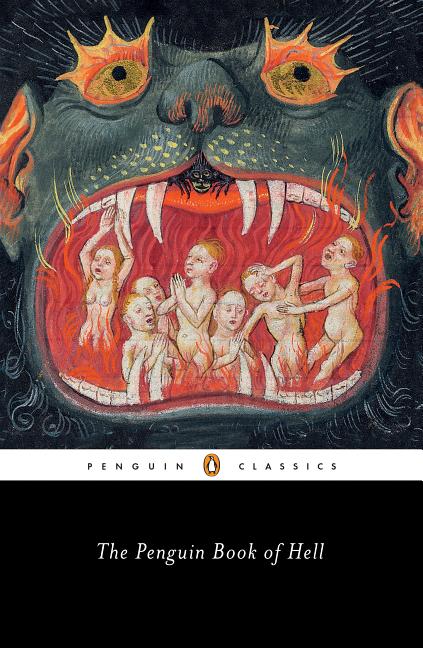 An anthology containing three thousand years of visions of Hell, from the ancient Near East to modern America.

What The Reviewers Say
Rave Ray Olson,
Booklist
Bruce fluently translates most of the Latin originals, adapts Longfellow’s version for several selections from Dante’s Inferno, and succinctly introduces and abstracts particular historical periods and each selection. Besides well- and fairly-well-known sources (Homer, Virgil, Bede, Aquinas, etc.), Bruce extracts fascinating less-known items, such as the gruesome twelfth-century Vision of Tundale and Victorian priest John Furniss’ merciless depiction of children in Hell. Consider this the grown-up’s My First Book on its subject.
Read Full Review >>
Mixed Vinson Cunningham,
The New Yorker
... quite terrifying ... The Book of Hell is determinedly Western and Christian in emphasis: Bruce regards Hades, together with Gehenna—where kings of Judah were said to sacrifice children by fire—and Sheol, the place of darkness awaiting all of us according to the Hebrew Bible, as the forerunners of Christianity’s fire and brimstone. He briefly acknowledges the older and vaguer pagan visions found in ancient Egypt and Mesopotamia; Jahannam, Islam’s place of punishment, doesn’t appear in the book at all ... This first canto [from Inferno is] regrettably absent [from the anthology] ... One of my nightmares is to end up like Milton’s Satan—whose absence from the Book of Hell is Bruce’s one egregious mistake.
Read Full Review >>
Mixed Stephen Greenblatt,
The New York Review of Books
The Penguin Book of Hell does not offer any explanation of how Christianity, from a contradictory jumble of ancient notions (Egyptian, Hebrew, Babylonian, Persian, Greek, and Roman), arrived at the full-fledged nightmare ... Whether it derived from the Pharisees or the Essenes or some entirely personal vision, Jesus’s emphasis on a fiery place of torment for sinners seems to have licensed the outpouring of texts, many of them translated here by the editor, that constitute most of a volume that would, given the absence of Buddhist and other traditions, have been more accurately titled 'The Penguin Book of Christian Hell' ... Dante’s stupendous poetic achievement is too rich and complex to fit comfortably into The Penguin Book of Hell. In its deep human sympathy, the Inferno resists functioning as a piece of doctrine or grim pedagogy, and the few excerpts that the editor includes seem out of place among the cruder fantasies and dire warnings that dominate the anthology ... One of the prime motives of these texts is rage, rage against people occupying positions of exceptional trust and power who lie and cheat and trample on the most basic values and yet who escape the punishment they so manifestly deserve.
Read Full Review >>
See All Reviews >>
What did you think of The Penguin Book of Hell?
© LitHub | Privacy