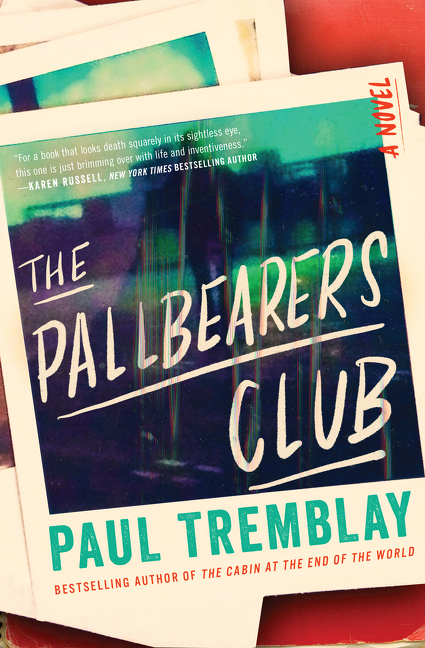 A psychological thriller from the nationally bestselling author of The Cabin at the End of the World and Survivor Song.

What The Reviewers Say
Rave Ray Palen,
Book Reporter
Paul Tremblay just keeps getting better, and The Pallbearers Club may be his most transcendent work to date...It’s a psychological thriller, a horror novel and a coming-of-age tale, and has enough appropriate humor sprinkled in without ever being campy...The book threatens to reach cult status, which is the highest compliment I can give it...Seventeen-year-old Art Barbara is not cool, and he is well aware of this...So, as a senior in high school, he decides to start the Pallbearers Club...Members will volunteer to act as pallbearers at funerals that are poorly attended...Since Art isn’t very popular, he only gets two people to join at first, but putting up flyers advertising the club gets him an additional member: Mercy Brown. Art and Mercy bond over music and their love of such genres as punk, post-punk and goth...As you hold The Pallbearers Club in your hands, you are unwittingly a member of the club as well...It is stated at one point (and quite cleverly, I must add) that a book is a coffin because it holds a body, sometimes more than one, and we are there to witness, mourn and celebrate.
Read Full Review >>
Positive Paul Di Filippo,
Washington Post
Tremblay’s depiction both of a New England adolescent’s life in the 1980s and the rock-club scene in the 1990s and early 21st century are vivid and accurate...He limns Providence especially well (with a few nods to our native son, H.P. Lovecraft)...The main attraction of this tale is the intricate portrait of a man who is full of potential, desire and talents, but who ultimately betrays himself by a not-so-subliminal desire for failure...I was reminded of Oskar in Gunter Grass’s The Tin Drum: forever a stymied juvenile...Art has fashioned himself into a stunted thing to be 'safe,' yet he and Mercy are two planets locked in a mutually destructive orbit...Readers keen on parsing enigmas of identity and reality, and those who simply relish quiet terrors and the portrait of a disintegrating mentality, will find that The Pallbearers Club is a welcome casket of chills to shoulder.
Read Full Review >>
Positive Publisher\'s Weekly
'I am not Art Barbara,' declares the narrator of this ambitious, metafictional pseudo-vampire thriller set in 2007 from Tremblay, but he adds he’ll be calling himself that throughout the memoir that follows...In 1988, Art began the Pallbearers Club in high school in Beverly, Mass., to serve as attendants at funerals that would otherwise be without mourners. One member of Art’s club is the pseudonymous Mercy Brown, named by Art after a late 19th-century New England vampire...Art, an unsuccessful musician who’s constantly doubting himself, comes to believe that Mercy is a vampire, subtly leeching life from him, and that he’s a vampire as well...Eventually, Art has recurring sightings and visions of jackets with faces draining the life from victims. Tremblay has a way with words ('Time is not linear but a deck of cards that is continuously shuffled'), and Mercy’s snarky commentary contrasts nicely with Art’s often maudlin narrative...This one will find a certain readership, but its overall oddness will keep it niche.
Read Full Review >>
See All Reviews >>
SIMILAR BOOKS
Fiction

The Devil Takes You Home
Gabino Iglesias
Positive
What did you think of The Pallbearers Club?
© LitHub | Privacy