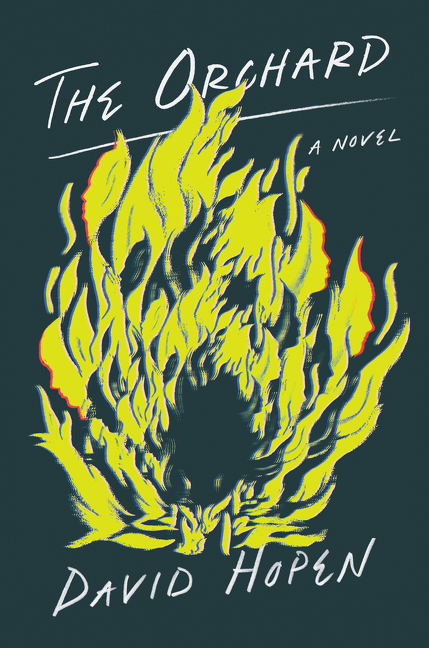 A coming-of-age story about a devout Jewish high school student whose plunge into the secularized world threatens everything he knows of himself.

What The Reviewers Say
Positive David Goodwillie,
The New York Times Book Review
To be transported, wholesale, into a new and unfamiliar world is one of literature’s great gifts, and the opening pages of David Hopen’s ambitious debut novel, The Orchard, promise exactly that ... Hopen is a stylish, atmospheric writer whose characters inhabit sensuous tableaus, and the palpable dreariness that lingers over Ari’s solitary Brooklyn childhood is all-encompassing ... Ari’s once-engaging story line — steeped in very real questions of morality and devotion — is subsumed by long pages of arcane, hyper-intellectual teenage discussions of the kind that make one relieved to be firmly entrenched in adulthood. Indeed, the second half of the novel reads like the literary equivalent of a mood board, stuffed full of overlapping ideas and asides, plots and tangents — part thriller, part religious inquiry, part love story, and part Tarttian homage. Hopen packs in so much that The Orchard, which began as heightened realism, soon pushes well beyond the point of plausibility. Perhaps, then, it is a story about faith after all. And the lesson, for a writer like Hopen, would be not to lose it. His talent is evident, his knowledge abundant. But one word has eluded him: streamlining.
Read Full Review >>
Rave Michael Cart,
Booklist
This is a brilliantly conceived and crafted coming-of-age novel of ideas, replete with literary and philosophical references, many of them Judaic. Indeed, the novel almost demands familiarity with Judaism, its culture, rituals, and vocabulary. Happily, though, this doesn’t compromise in any way the larger metaphysical meanings of the novel.
Read Full Review >>
Positive Lauren Bufferd,
BookPage
David Hopen’s ambitious debut novel combines the religiously observant world of Chaim Potok’s books with the academic hothouse of Donna Tartt’s The Secret History and F. Scott Fitzgerald’s observations of the rich and privileged ... Though Hopen is tuned in to Aryeh’s toxic mix of advanced intellectual abilities and low self-esteem, the novel suffers from underdeveloped female characters who exist as unattainable objects rather than individuals with plans and dreams of their own ... Acknowledging these considerable shortcomings, The Orchard is still a suspenseful novel with a brisk pace and a surprising outcome ... a notable variation on the classic campus novel.
Read Full Review >>
See All Reviews >>
SIMILAR BOOKS
Fiction

All the Broken Places
John Boyne
Mixed
What did you think of The Orchard?
© LitHub | Privacy