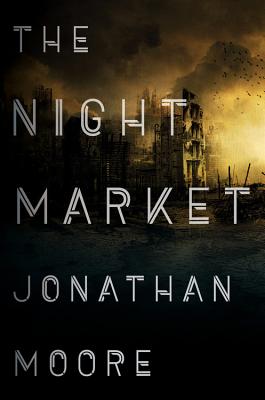 In this near-future thriller, Inspector Ross Carver struggles to discern what happened after he is drugged and removed from a crime scene by six FBI agents.

What The Reviewers Say
Rave Dennis Drabelle,
The Washington Post
...a grim and gripping tale of well-earned paranoia … Moore blends his story’s futuristic elements with more traditional tricks of the genre … The book’s tone is Chandleresque, the conspiracy worrying Carver and Jenner expands to Pynchonean proportions, and the physical ick they encounter might have oozed out of a Cronenberg movie. But on the whole, I’ll wager, The Night Market and its predecessors, The Poison Artist and The Dark Room, are like nothing you’ve ever read.
Read Full Review >>
Rave G. Robert Frazier,
BookPage
Moore’s latest novel is a noirish, moody mystery shrouded with conspiracies that would make any X-Files fan rejoice … Carver, with Mia’s help, sets off to find out what happened during his blackout. In typical gumshoe fashion, Carver follows one lead to the next and slowly begins piecing together a trail of people, places and events, ultimately leading to the discovery of a staggering conspiracy. Moore expertly paints a bleak cityscape for our hero, and in this world, no one can be trusted, and dangerous secrets are just waiting to be uncovered.
Read Full Review >>
Positive Lance Charnes,
Criminal Element
Carver’s a semi-grizzled veteran detective of a kind we’ve seen before in these kinds of stories—tight with his words, close with his feelings—but he’s not Philip Marlowe in an updated suit … We look over Carver’s shoulder for the entire narrative, so by default, he’s the best-developed character. Except for Mia, the rest of the cast doesn’t get the same level of nuance, and a few days after you finish the book, you’ll probably struggle to remember their names, far less their personalities … The Night Market is good, sturdy Chandleresque noir with a well-realized plot, a hero who’s reasonably easy to get along with, and enough atmosphere to unspool the movie satisfyingly in your head.
Read Full Review >>
See All Reviews >>
SIMILAR BOOKS
Fiction

The Lamplighters
Emma Stonex
Rave
What did you think of The Night Market?
© LitHub | Privacy