The Mystery of Three Quarters: The New Hercule Poirot Mystery 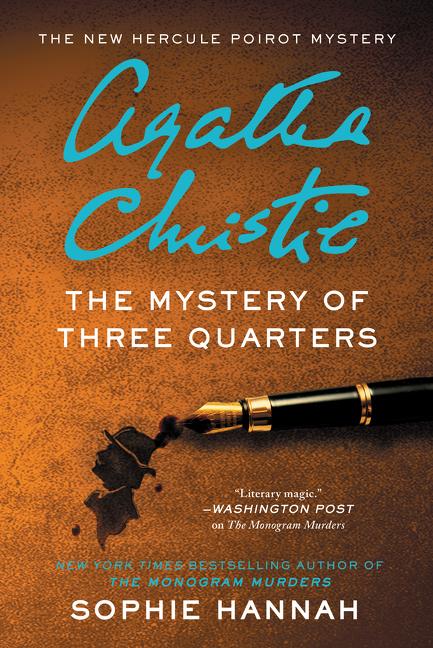 Hercule Poirot—the star of Agatha Christie’s Murder on the Orient Express—returns in this mystery set in London in 1930. Four letters have been forged with his signature, each accusing a different person of murder.

What The Reviewers Say
Rave Irma Heldman,
Open Letters Review
...an elegantly ingenious addition to the series ... The wrap-up is a nifty variation on one of Christie’s original solutions. Once again, Sophie Hannah demonstrates that she is more than capable of nailing the style and substance of the great lady herself. She has produced another feast for Christie fans.
Read Full Review >>
Positive Doreen Sheridan,
Criminal Element
While it was absolutely delightful to slip once more into the familiar milieu—I inhaled the original canon in a single year when I was a teenager—I admit to being a little thrown off by the introduction of some of the newer recurring characters ... if you didn’t know any better, it would be very hard to tell which characters are entirely creations of Ms. Hannah’s and which are continuations ... It’s easy to see why the Agatha Christie estate chose Ms. Hannah for the daunting task of chronicling Poirot’s continuing adventures. In her capable hands, Hercule Poirot lives and investigates as creatively and astutely as he ever has.
Read Full Review >>
Positive Kirkus
As in her two earlier Agatha Christie pastiches (Closed Casket, 2016, etc.), Hannah is content to supply boundless ingenuity in place of more 1930s detail, this time adding a divinely inspired denouement that seems to go on for longer than the week that leads up to it.
Read Full Review >>
See All Reviews >>
SIMILAR BOOKS
Fiction

The Maid
Nita Prose
Positive
What did you think of The Mystery of Three Quarters: The New Hercule Poirot Mystery?
© LitHub | Privacy