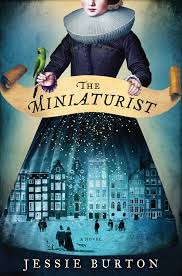 Set in Amsterdam in 1686, the illustrious merchant trader Johannes Brandt presents his young bride with a cabinet-sized replica of their home – a gift that helps Nella to pierce the closed world of the household and to uncover its unusual secrets.

What The Reviewers Say
Rave Wendy Smith,
The Washington Post
Jessie Burton’s accomplished first novel is many things — a deftly plotted mystery, a feminist coming-of-age drama and a probing investigation of marriage. Burton evokes the sights, sounds and smells of 17th-century Amsterdam as she brings to life a cast of sensitively rendered characters, each longing to be free … The novel’s central journey is Nella’s maturation, and it goes grimly hand in hand with the suffering of people she has come to love. Burton gives her narrative the propulsive drive of a thriller, but her distinctive prose conveys deeper, harder answers than a whodunit. This fine historical novel mirrors the fullness of life, in which growth and sorrow inevitably are mingled.
Read Full Review >>
Rave Elizabeth Rosner,
The San Francisco Chronicle
while serving up a dramatic centerpiece full of secrets and power struggles. Its scope is vast, even though its most remarkable creations can be held in the palm of a woman’s hand … One of the greatest achievements of this ambitious novel has to do with its simultaneous focus on intimate detail and universal observation. The characters wrestle with inner demons at the same time that they are engaged in a battle for physical and cultural survival; personal betrayals and redemptions reflect large-scale conquests in commerce and ideology. We even get a glimpse of the Dutch East India Company as the first-ever multinational corporation, financed by shares that established the first modern stock exchange.
Read Full Review >>
Mixed Melissa Harrison,
The Financial Times
There is much to enjoy in the successive revelations of the plot, as well as a good sense of a city so familiar now as a friendly, laid-back European destination but then at the heart of a vast trading empire. The richly drawn interiors are nicely claustrophobic, while the flavours and smells of the food are both seductive and sickening. Burton is good at atmospheres, too, and much of the book is imbued with a sense of indefinable threat … The Miniaturist is not perfect, however. Key scenes waver out of Burton’s control, leaving the reader unclear about what has happened and why; the flow of time is uneven, and some characters’ motivations (including that of the miniaturist) are unclear. A general sense of imprecision runs through the book, from plot right down to the level of metaphor and language.
Read Full Review >>
See All Reviews >>
SIMILAR BOOKS
Fiction

Theatre of Marvels
Lianne Dillsworth
Positive
What did you think of The Miniaturist?
© LitHub | Privacy