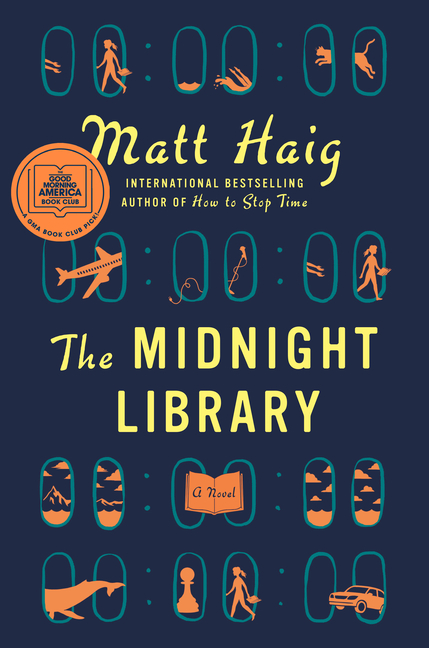 Somewhere out beyond the edge of the universe there is a library that contains an infinite number of books, each one the story of another reality. One tells the story of your life as it is, along with another book for the other life you could have lived if you had made a different choice at any point in your life. While we all wonder how our lives might have been, what if you had the chance to go to the library and see for yourself? Would any of these other lives truly be better?

What The Reviewers Say
Rave Harvey Freedenberg,
BookPage
This gentle but never cloying fable offers us a chance to weigh our regret over missed opportunities against our gratitude for the life we have ... Haig, who’s been frank about his own experiences with depression, is a sympathetic guide for Nora’s journey. His allusions to multiverses, string theory and Erwin Schrödinger never detract from the emotional heart of this alluring novel. And when Nora’s sojourn allows her to realize that perhaps 'even the most seemingly perfectly intense or worthwhile lives ultimately felt the same,' and that 'life simply gave you a whole new perspective by waiting around long enough to see it,' Haig brings her story to a conclusion that’s both enlightening and deeply satisfying.
Read Full Review >>
Positive Karen Joy Fowler,
The New York Times Book Review
Into this ever-popular genre, Matt Haig’s The Midnight Library is a welcome addition ... The issue of the many Noras temporarily displaced from their own root lives is somewhat troubling. Where do they go in the interim? ... It can be hard to keep a reader’s energy invested in a depressed and somewhat listless character, but Nora is smart and observant; she remains good company ... There is likewise a danger that such a recursive plotline will tire the reader. But here, too, the book succeeds. At just the right moment, not too soon and not too late, Nora makes her final decisive move, taking us into the last section of the book. The ending is satisfying but not surprising. By the time it comes, in fact, only one choice still seems possible ... The narrative throughout has a slightly old-fashioned feel, like a bedtime story. It’s an absorbing but comfortable read, imaginative in the details if familiar in its outline. The invention of the library as the machinery through which different lives can be accessed is sure to please readers and has the advantage of being both magical and factual. Every library is a liminal space; the Midnight Library is different in scale, but not kind. And a vision of limitless possibility, of new roads taken, of new lives lived, of a whole different world available to us somehow, somewhere, might be exactly what’s wanted in these troubled and troubling times.
Read Full Review >>
Mixed Jason Sheehan,
NPR
The Midnight Library is unusual in that it follows a plot with no twists, no turns that don't feel like a gentle glide. Inside the library itself, Mrs. Elm's job is to present everything to Nora very clearly and to lay out the stakes very directly. Infinite options, yes, but maybe not an infinite amount of time in which to choose. Infinite possibility, sure, but only one shot at each of them. When Nora loses hope, the library starts to collapse. When she finds herself excited again about living, things calm down. And there's a deliberateness to it all. A simplicity to the narrative that has to be taken as a choice on Haig's part, not an accident ... what sucks a measure of the color and life from The Midnight Library is that Nora, as a character, doesn't really want anything. Or maybe she does, but the arc of the plot hinges on her trying to figure out what exactly it is. And a character who doesn't actively want something—even when it is something so basic as to keep on living—is a hard character to identify with. Ultimately, Haig gives Nora (and those of us following along with her) a straightforward path from suicide to closure, from regret to acceptance.
Read Full Review >>
See All Reviews >>
SIMILAR BOOKS
Fiction

The Deceptions
Jill Bialosky
Positive
What did you think of The Midnight Library?
© LitHub | Privacy