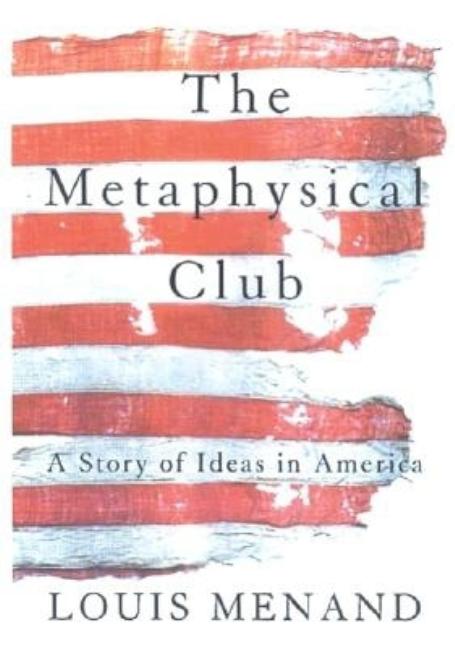 Winner of the 2002 Pulitzer Prize for History, Louis Menand's collective biography traces the origins of American pragmatism by charting the lives of its founding fathers.

What The Reviewers Say
Rave Jean Strouse,
The New York Times Book Review
Menand brings rare common sense and graceful, witty prose to his richly nuanced reading of American intellectual history ... On occasion, when The Metaphysical Club travels into the pure genealogy of thought, readers unfamiliar with these matters may feel a bit lost. But when the lives animate the ideas, everything works ... Even Holmes might enjoy seeing their ideas so carefully and imaginatively explored.
Read Full Review >>
Rave Ron Charles,
The Christian Science Monitor
A story of almost ludicrous breadth and depth, winding around handwriting analysis, birds, racism, railroads, universities, and God. The threat of philosophical textbookism hovers in the margins, but Menand's determination to 'see ideas as always soaked through by the personal and social situations in which we find them' fends off that danger with sometimes dazzling effect ... The triumph of The Metaphysical Club is the author's dramatic demonstration of the parallel between developments in science and philosophy ... He catches the rhythms of 19th-century America with striking clarity, swinging from complex explanations to epigraphic summaries. The doors of The Metaphysical Club look intimidating, but don't be put off. It's engaging, wise, and touched with wit - a chance to follow an inspector around the foundations of American thought and understand this house of mirrors we've inherited.
Read Full Review >>
Mixed John H. Summers,
Boston Review
By presenting ideas as deeply embedded in circumstance—'soaked through by the personal and social situations in which we find them'—and not in splendid intellectual isolation, Menand has attempted to write a history of pragmatism on its own terms ... This dramatization of human culture helps account for The Metaphysical Club's popular appeal: its biographical portraits make for terrific reading, and its success as popular history is already assured ... Menand has trouble explaining how and why these different thinkers converged on a set of tightly related ideas ... Moreover, by so thoroughly localizing pragmatism in specific personalities and biographies, Menand diminishes his ability to explain it as a set of ideas with broad historical and contemporary significance ... Menand repeatedly strains historical and philosophical interpretation in the service of personalized animation ... The most satisfying moments in The Metaphysical Club occur when the emotional arc of one of the characters meets the articulation of an idea...Even during such moments, however, the general reader is pulled back and forth between edification and enlightenment ... Not only do broad, historical explanations become more difficult to sustain as Menand descends to the idiosyncratic details of private life, but his focus on those details does not aid evaluation of pragmatism as a philosophical outlook ... So it is that Menand's book flatters a present sensibility that offers little place for big ideas or independent moral judgment, but reserves many seats for dramatic personalities.
Read Full Review >>
See All Reviews >>
What did you think of The Metaphysical Club?
© LitHub | Privacy