The Man They Wanted Me to Be: Toxic Masculinity and a Crisis of Our Own Making 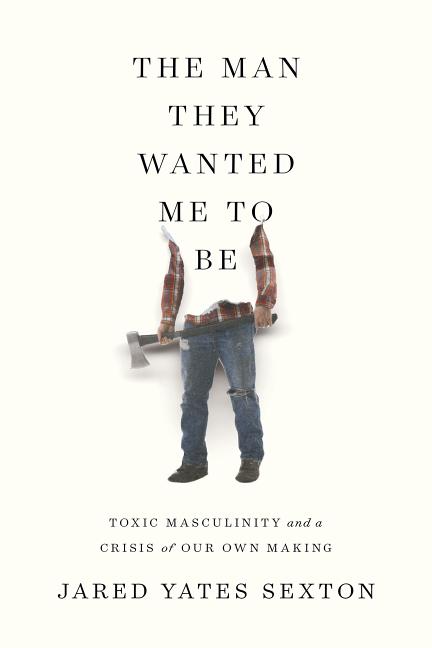 The Man They Wanted Me to Be is both memoir and cultural analysis. Jared Yates Sexton alternates between an examination of his working class upbringing and historical, psychological, and sociological sources that examine the genesis of toxic masculinity and its consequences for society.

What The Reviewers Say
Positive Josh Cook,
The Los Angeles Review of Books
...[an] insightful and important new book The Man They Wanted Me to Be is centered in Sexton’s personal experience...He says very little about how people of color experience toxic masculinity, the ways class impacts toxic masculinity, or about the experiences of women and people of other sexualities and genders. Sexton is open about these limits, and frequently clarifies when an experience is unique to straight white men. The story of toxic masculinity is bigger than one man and to tell it completely would require telling the stories of men of color and men of different classes and women and people of other genders and sexualities. But Sexton isn’t trying to tell the story of toxic masculinity, he is trying to find a path forward from it. The scope of his book needs to be narrow, because it needs to be driven by sharing his personal story, sharing the pain he felt, and sharing the help he sought to remedy that pain. As important as the data is and as insightful as Sexton is with that data, the most important thing he does in The Man They Wanted Me to Be is break the taboo about sharing vulnerabilities...
Read Full Review >>
Rave Nicholas Cannariato,
NPR
This book is critically important to our historical moment. It's also really good — and Sexton's voice is unrelentingly present in it. It crackles with intensity and absolutely refuses to allow the reader to look away for even a moment from the blight that toxic masculinity in America has wrought ... What also makes The Man They Wanted Me to Be work so well is that it's largely a personal story ... Sexton also succeeds in a truly difficult task: casting the abusive and self-destructive men in his life as simultaneously contemptible and victims themselves ... So how do we as a culture get past toxic masculinity when, as Sexton suggests, its paragon occupies the Oval Office and its pathology is empowered? Sexton's great book points the way.
Read Full Review >>
Positive Brad Tyer,
The Los Angeles Review of Books
Sexton is too self-aware a writer to give himself a full-fledged redemption arc, but his is a story of ongoing struggle and escape ... Sexton’s book provides...inspiration, though without the trite sentimentality that usually accompanies self-conscious self-improvement. He has dragged his own knuckles through the mud, and if he’s found no pat answers, he’s at least found ways to engage the journey toward becoming a better man. It’s a path that men need to walk. And we can use all the roadmaps we can find.
Read Full Review >>
See All Reviews >>
What did you think of The Man They Wanted Me to Be: Toxic Masculinity and a Crisis of Our Own Making?
© LitHub | Privacy