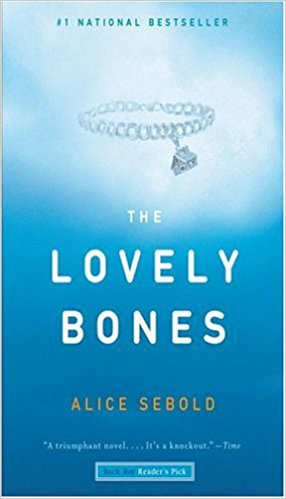 The Lovely Bones is Alice Sebold's debut that treats sensational material with literary grace, narrated from heaven by the victim of a serial killer and pedophile.

What The Reviewers Say
Positive Katherine Bouton,
The New York Times
...consider that the bones of The Lovely Bones belong not to the victim but to an abstract and quite positive idea — namely, that bones are the structure on which living things are built ... a high-wire act for a first novelist, and Alice Sebold maintains almost perfect balance. There are a couple of faltering moments ... Susie is our guide through the maze of grief and dysfunction that follows her brutal death. Her dispassionate, observant young voice and poignant 14-year-old view of life don't change much ... [Sebold] deals with almost unthinkable subjects with humor and intelligence and a kind of mysterious grace.
Read Full Review >>
Positive Rebecca Mead,
London Review of Books
The book concerns a crime that could not be more horrible, the rape and murder of a 14-year-old girl; but its tone is joyful, its message comforting, and its metaphysics unimpeachable in a culture which prides itself on its piety while adhering to an incoherent gospel of personal growth ... the book is told from the point of view of the dead Susie: it is a coming of age story told by a character who isn’t of age and never will be. Susie is a bright and ironical observer, even of her own murder ... Sebold’s writing is both lyrical and grounded, and her narrative moves with impressive assurance between the spheres ... The Lovely Bones dwells in the familiar American province where wanton supernaturalism meets all-embracing sentimentality.
Read Full Review >>
Mixed Ali Smith,
The Guardian
The dead 14-year-old heroine of Alice Sebold's The Lovely Bones is stranded in a much less supple, much more primitive and chronological parenthesis ... The book's "bones", above all, cease to be those of Susie's never-found body, or the animal bones her creepy killer plays with to distract himself from other young girls; instead they become "lovely", being connections between loved ones ... this is an interesting, calculated blandness, Sebold being concerned with the creation of a safe and supportive place in the face of a horror she herself has been so close to ... novel becomes a hybrid of realism and wishful thinking ... The Lovely Bones is so keen in the end to comfort us and make safe its world that, however well-meaning, it avoids its own ramifications.
Read Full Review >>
See All Reviews >>
SIMILAR BOOKS
Fantasy

Rabbits
Terry Miles
Rave
What did you think of The Lovely Bones?
© LitHub | Privacy