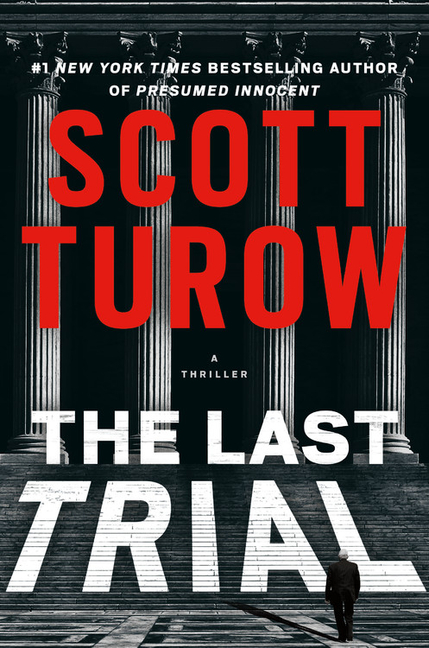 At 85 years old, Alejandro "Sandy" Stern is on the brink of retirement. But when his old friend Dr. Kiril Pafko, a former Nobel Prize winner in medicine, is faced with charges of insider trading, fraud, and murder, his entire life's work is put in jeopardy, and Stern decides to take on one last trial.

What The Reviewers Say
Rave Bill Sheehan,
The Washington Post
Turow has done his homework, and his incremental presentation of the evidence not only illuminates the legal issues involved, but it also offers a thorough, digestible account of the steps — research, development, testing — by which a newly created drug is brought to market. Turow is particularly good at integrating this arcane material into a dramatic narrative. Readers of The Last Trial will find themselves both entertained and painlessly educated ... Turow teases out these mysteries with immense skill and deliberation. The result is another intelligent page turner by an acknowledged master. Turow, though, has always been more than a popular entertainer. He is a first-rate novelist for whom the world of the courtroom — a world in which the justice done is only 'rough and approximate' — becomes the vehicle for intense investigations into the varieties of human frailty ... No one tells this sort of story better than Turow. No one has illuminated the human side of the legal profession with such precision and care. The Last Trial is Scott Turow at his best and most ambitious. He has elevated the genre once again.
Read Full Review >>
Rave Janet Maslin,
The New York Times
... true-to-form, pleasingly substantial ... In this meticulously devised courtroom drama, rich with character detail, Turow again demonstrates what he does best: roll out a complex, keenly observed legal case yet save a boatload of surprises for its ending. And make it personal. There’s a lot of Sandy’s own life wrapped up in the case with which he’s exiting ... A lot of plot and keen observation keep this book moving. Turow’s regular readers will find him in gratifyingly good form ... The book proceeds just as a trial would, with chapters devoted to procedural stages and the different charges Pafko faces. No writer invests these gradual legal developments with the kind of micro-suspense that Turow does.
Read Full Review >>
Rave Rick Kogan,
The Chicago Tribune
Turow makes the most complicated legal matters understandable and even exciting ... His latest sure-to-be-a-bestseller-and-likely-to-be-a-movie-too novel ... One of the admirable aspects of Turow’s work is that he is no showoff. As literate and smart as anyone in the writing biz, he is not given to fancy literary flourishes but rather devotes his considerable gifts to deep insights about the failings of the flesh ... Turow writes like a dream. Obviously having digested piles of information about drug research, data manipulation and insider trading, his courtroom becomes stage for compelling explanations of rules of evidence, the nuances of hearsay and how to conduct effective cross-examination ... These people come to colorful life and though the trial is center stage, it will be Turow’s characters who linger in the mind.
Read Full Review >>
See All Reviews >>
SIMILAR BOOKS
Fiction

The Hacienda
Isabel Cañas
Positive
What did you think of The Last Trial?
© LitHub | Privacy