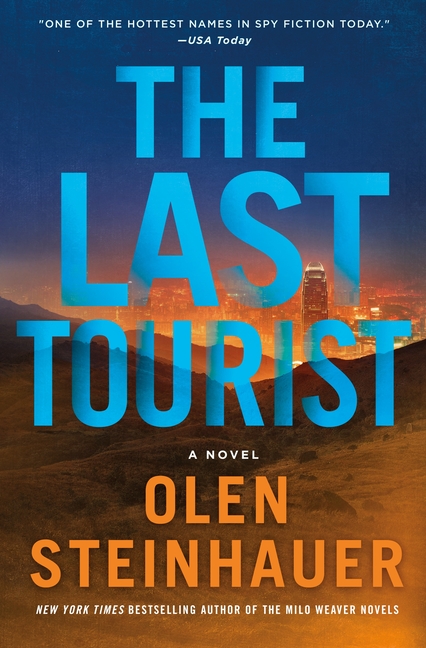 Reluctant CIA agent Milo Weaver thought he had finally put "Tourists”—CIA-trained assassins—to bed. Milo is hiding out in Western Sahara when a young CIA analyst arrives to question him about a series of suspicious deaths and terrorist chatter linked to him. Their conversation is soon interrupted by a new breed of Tourists intent on killing them both, forcing them to run.

What The Reviewers Say
Positive Charlie Gofen,
The National Book Review
As always, Steinhauer skillfully portrays the paranoia of the spy world, with all of its conspiracies, double agents, and possible moles ... The one caveat about The Last Tourist is that it’s not an easy beach read, because it requires a fair amount of concentration to keep the characters sorted out and stay with the plot twists. But for anyone who wants a stylish and sophisticated spy thriller with chess-grandmaster-level plotting, moral complexity, and even social commentary, read Steinhauer.
Read Full Review >>
Positive Bill Ott,
Booklist
...a byzantine tale of alliances formed and discarded, double crosses tripled and quadrupled, in which 'corporations are the new nation-states,' with their own armies. Like John le Carré’s Agent Running in the Field... Steinhauer pits a disenchanted agent, an ideologue no more, against the new evil empire, multinational corporations for whom 'money knows no borders.' It’s not a fair fight, but Milo is a hell of a counterpuncher, and we love rooting for him.
Read Full Review >>
Rave Publishers Weekly
... stunning ... No dummies survive in this twisty shadow realm, and Milo's wits keep him alive as the complex, layered plot reaches a shrewd, nuanced climax at the World Economic Forum, leaving the reader with the hope that global elites can’t rig the rules of every game. The author does a masterly job of evoking dingy desert cities and the rarified air of Davos, Switzerland. Steinhauer reinforces his position at the top of the espionage genre.
Read Full Review >>
See All Reviews >>
SIMILAR BOOKS
Fiction

The Devil Takes You Home
Gabino Iglesias
Positive
What did you think of The Last Tourist?
© LitHub | Privacy