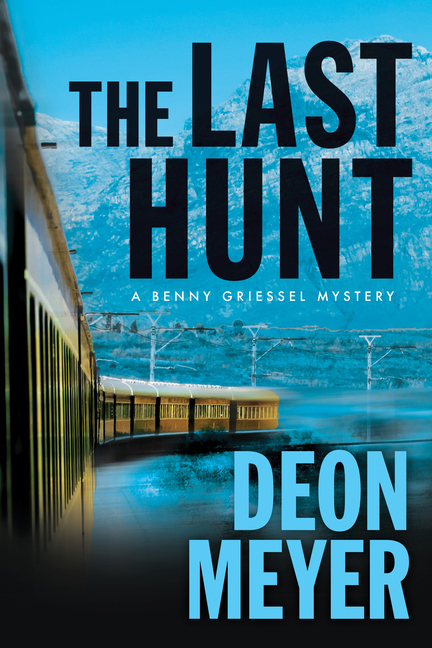 In this sixth thriller featuring Benny Griessel and Vaughn Cupido, the two South African police captains review the evidence in the disappearance—and possible murder—of ex-cop Johnson Johnson from the world's most luxurious train line. Two fellow travelers might have the answers Griessel and Cupido need—but they too seem to have disappeared into thin air, and the few clues that exist suggest a cover-up.

What The Reviewers Say
Rave John Cleal,
Crime Review (UK)
Meyer weaves a web of intrigue, deception thrills and violence in as good a murder mystery/police procedural as you’re likely to read. The richly drawn characters are flesh and blood and the plots all too realistic. His eye for South Africa and keen view of people and places bring the story to dramatic and atmospheric life. In a country with 11 official languages, he captures its cultural diversity, while doing a great job bringing Cape Town to overseas readers ... The Last Hunt is up to the minute, quite brilliant and well worth reading!
Read Full Review >>
Rave Michael Sears,
The New York Journal of Books
... actually two books in one. It’s a tense assassination thriller set in France, and it’s an intriguing police procedural set in South Africa. Although the two stories develop independently, both are different aspects of the same plot and they come together at the end in an unexpected and satisfying way ... The Griessel section of the story would be worth the price of admission on its own...But Daniel Darret’s story also grabs us ... Weaving two apparently independent stories together, keeping the tension ramping in both, and bringing them to a simultaneous climax, is a challenging undertaking. Meyer pulls it off seemingly effortlessly. He’s that good ... A final note: the translation is excellent. You wouldn’t guess that the book was originally written in Afrikaans.
Read Full Review >>
Positive G. Robert Frazier,
BookPage
... mystery, intrigue and riveting suspense ... The complex plot loses a bit of immediacy when Meyer switches from one storyline to the other, but after a few chapters it promptly sweeps you along again. Part of the fun is trying to discern how the two stories will connect and in anticipating the action-packed finale ... A resident of Stellenbosch, South Africa, Meyer handles the intricate plotlines with superb skill, proving why he is an internationally acclaimed, prize-winning author of 12 thrillers. The action alone is enough to keep you reading, but Meyer gives us multifaceted characters who are just as interesting ... Whether you’re in it for the mystery or for the action, The Last Hunt delivers on both counts.
Read Full Review >>
See All Reviews >>
SIMILAR BOOKS
Fiction

Dirt Creek
Hayley Scrivenor
Rave
What did you think of The Last Hunt: A Benny Griessel Novel?
© LitHub | Privacy