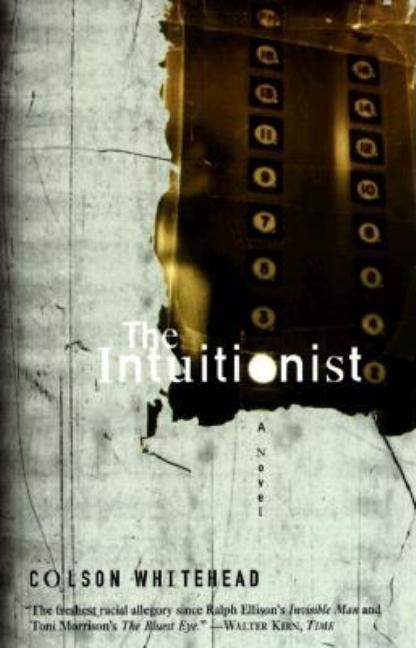 It is a time of calamity in a major metropolitan city's Department of Elevator Inspectors, and Lila Mae Watson, the department's first black female inspector, is at the center of it. She has the highest accuracy rate in the entire department, but when an elevator in a new city building goes into total freefall on Lila Mae's watch, chaos ensues.

What The Reviewers Say
Rave John Updike,
The New Yorker
... a strikingly original and polished début ... seizes upon an unsung wonder in our midst, the elevator, and sings its history, its technology, its romance, adding to the novelist’s solid research a scintillating pinch of sci-fi fantasy ... Whitehead unfolds his raddled undercity with the terse poetry and numinous dignity of the early Malamud. The prose is a gas, bubbly, clean, often funny in its bursts of mock-mandarin social exposition ... Whitehead can try too hard, but generally his writing does what writing should do; it refreshes our sense of the world.
Read Full Review >>
Positive Gary Krist,
The New York Times
... ingenious and starkly original ... While he does fall back on the conventions of the genre (at one point, an overzealous reporter gets his fingers broken by thugs), he uses them mainly as narrative scaffolding for what emerges as his real project -- an ambitious, wide-ranging exploration of racial struggle and the dynamics of social progress. The idea of physical elevation, of course, has obvious metaphorical significance in this context, and Whitehead makes much of it, framing his subject as a contest between warring conceptions of how best to lift people from one level of being to the next. And since any attempt to replace 'the robust edifices of the old order' is likely to spawn a thicket of deceptions and betrayals, his use of the film noir idiom proves cunningly apt ... Ultimately, I'm not sure Whitehead is in full control of the many thematic elements he has unleashed in this dense and sometimes difficult book. Toward the end, one can sense Whitehead's ambition straining against the seams of the pulp fiction story he's chosen to contain it. He's obviously trying to do for second-generation elevator transport what Thomas Pynchon did for alternative mail delivery in The Crying of Lot 49 ...That's a tall order, but the fact that Whitehead has succeeded as well as he has is news worth spreading. Literary reputations may not always rise and fall as predictably as elevators, but if there's any justice in the world of fiction, Colson Whitehead's should be heading toward the upper floors.
Read Full Review >>
Rave Mark Luce,
BookPage
... the most innovative, creative, and visionary new novel in a few years ... A stunning contemplation on race, The Intuitionist brings to mind the strength of Ralph Ellison and the quirky brilliance of Thomas Pynchon ... what makes The Intuitionist so darn good is the way Whitehead balances his concerns. By turns literate, thrilling, comic, and poignant, Whitehead lifts readers into this strange world and never allows identity politics to turn the book into an ideological jag. His prose pulses across the page, seamlessly jumping characters, time, style, and events. Whether with one-word thoughts or complex, descriptive sentences, Whitehead draws readers into this fantastic world of verticality and races us to the top.
Read Full Review >>
See All Reviews >>
SIMILAR BOOKS
Fiction

Each of Us Killers
Jenny Bhatt
Rave
What did you think of The Intuitionist?
© LitHub | Privacy