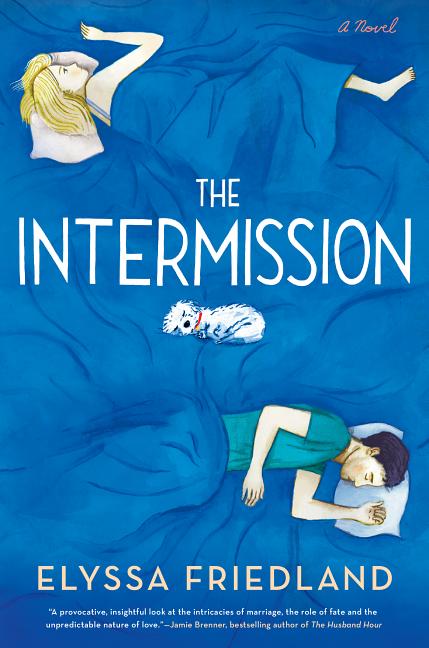 A couple puts their marriage on hold for six months to find out if they’re better together or apart.

What The Reviewers Say
Positive Sam Sacks,
The Wall Street Journal
The prospect of parenthood provokes the crisis in Elyssa Friedland’s novel The Intermission. For five years Cass and Jonathan Coyne have enjoyed what is to all appearances a happy and enviable marriage. Yet on the very night that they’ve designated to begin trying for a baby, Cass announces that she wants to take a six-month break: 'Just some space. A refresher. A chance to think.' Or what, with strained nonchalance, Jonathan comes to call 'a trial separation,' as if it were akin to sampling a new kind of shampoo ... The chapters switch back and forth between their stories, layering deceptions and misunderstandings. The snappy dialogue makes this an effortless page-turner, almost a movie treatment more than a novel.
Read Full Review >>
Rave Erin Holt,
Booklist Online
Cass and Jonathan Coyne have been married for five years. Seemingly the perfect couple, they even make bets with each other on how long their friends will stay married. So it comes as a shock to Jonathan when, on the night they have earmarked to start trying for a baby, Cass declares a break, or intermission, from their marriage in order to truly know if they are meant to be together before expanding their family ... Expertly paced and eerily realistic, this novel will make readers think twice about the line between deception and mystery in any relationship.
Read Full Review >>
Mixed Publishers Weekly
...Told from both Cass’s and Jonathan’s perspectives, the story follows Cass as she leaves her posh New York apartment and begins an affair with a manipulative Hollywood producer in L.A. In Cass’s absence, Jonathan reaches out to his high school sweetheart and attempts to reconcile a disturbing indiscretion from his prep school past. Told in direct prose, Friedland’s emotionally fraught narrative shows how seemingly insignificant events inform and hide the 'deep, dark truths... that reveal [the] weaknesses in the fibers' in the Coynes’ relationship ... Although the characters are frustratingly feckless and the ending is too abrupt, Friedland insightfully dissects motives, lies, and love in this engrossing deconstruction of a bad marriage.
Read Full Review >>
See All Reviews >>
SIMILAR BOOKS
Fiction

How to Fail at Flirting
Denise Williams
Positive
What did you think of The Intermission?
© LitHub | Privacy