The Indian World of George Washington: The First President, the First Americans, and the Birth of the Nation 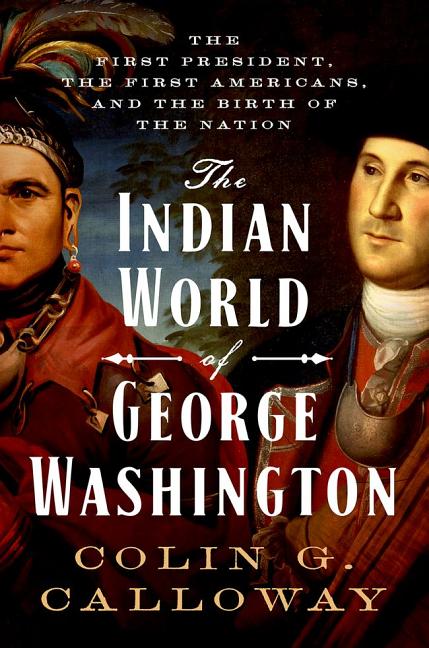 A Professor of History and Native American Studies at Dartmouth College offers a new look into the first U.S. President by considering him through the lens of his relationship with the Indian tribes and nations with which he by turns collaborated and battled.

What The Reviewers Say
Rave Peter Cozzens,
The Wall Street Journal
The fateful relationship between George Washington and the Indian tribes that bordered the new Republic is the subject of Colin G. Calloway’s brilliantly presented and refreshingly original The Indian World of George Washington ... Mr. Calloway deftly brings to life figures such as the Mohawk war chief and statesman Joseph Brant, the Miami war chief and realist Little Turtle and the bicultural Creek chief and consummate diplomat Alexander McGillivray—all towering figures who exercised the sort of outsize influence over the nation’s destiny that better known American Indian figures such as Sitting Bull and Geronimo never approached. An essential new entry in the literature of George Washington and the early Republic, The Indian World of George Washington conveys his interactions with Indians and the role of Indian land in Washington’s public and personal life 'from cradle to grave.'
Read Full Review >>
Positive Susan Dunn,
The New York Review of Books
George Washington is undoubtedly the dominant figure in the formative events of American nation-building, and Calloway emphasizes that in order to fully understand him, historians must not ignore the vital part that Native Americans played in his life as well as in the history of the young nation. In fact, Native Americans take center stage in his sweeping and deeply researched study. He dismisses the old Eurocentric stereotypes of Indians as savages, whether bloodthirsty or noble, and instead dives into the tremendous complexity of eighteenth-century America and its diverse cultures. He searches for Native Americans’ own voices as they desperately struggled to defend and preserve their autonomy, land, communities, and traditions against white America’s inexorable drive to spread onto their soil. Combining political, social, military, and diplomatic history, an undertaking that poses significant narrative challenges, he develops a maze of unremitting violent confrontations, multitribal confederacies and gatherings, cooperative trade agreements, currents of coexistence, deceitful land deals, diplomatic negotiations, amicably signed treaties, overt bribes, and grim betrayals. Calloway offers no less complex a portrait of Washington ... Ultimately, Calloway seems unsure if the story he seeks to tell is a true tragedy or a morality play designed to affirm our own twenty-first-century sense of superiority ... Calloway is deeply ambivalent about Washington’s part in the Indian world, including his unsuccessful efforts to protect Indian territory and his wish to steer Native Americans toward assimilation into white society.
Read Full Review >>
Positive Ryan Tripp,
New Book Network
By the end of his life, Washington knew more than anyone else in America about the frontier and its significance to the future of his country. The Indian World of George Washington offers a fresh portrait of the most revered American and the Native Americans whose story has been only partially told. Calloway’s biography invites us to look again at the history of America’s beginnings and see the country in a whole new light.
Read Full Review >>
See All Reviews >>
SIMILAR BOOKS
Biography

The Trials of Harry S. Truman: The Extraordinary…
Jeffrey Frank
Positive
What did you think of The Indian World of George Washington: The First President, the First Americans, and the Birth of the Nation?
© LitHub | Privacy