The Impossible First: From Fire to Ice—Crossing Antarctica Alone 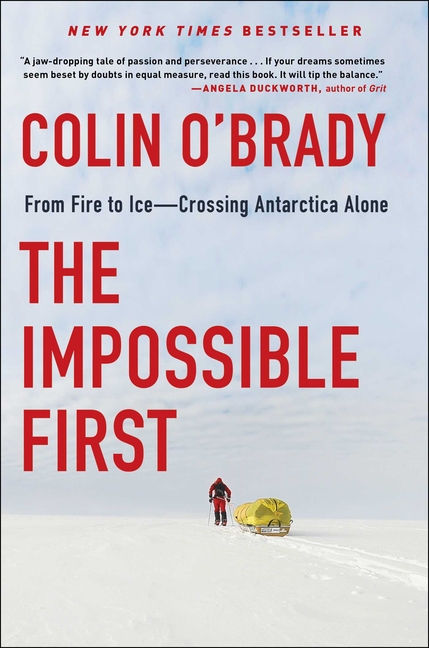 Publisher
Scribner Book Company
Date
January 14, 2020
Prior to December 2018, no individual had ever crossed the landmass of Antarctica alone, without support and completely human powered. Yet, Colin O’Brady was determined to do just that, even if, ten years earlier, there was doubt that he’d ever walk again normally. O'Brady's memoir spans his triumphant recovery from a tragic accident to his gripping 932-mile solo crossing of Antarctica.

What The Reviewers Say
Positive David Kortava,
The New Yorker
The obvious question is: Why do this to yourself? A charitable reading would credit O’Brady for testing the limits of human potential and furnishing us with a rich metaphor for chasing our dreams. A cynic might see naked ambition and a competitiveness verging on the colonial ... In itself, O’Brady’s story is neither cautionary nor inspirational; it’s a Rorschach test for one’s own character and aspirations. To what extremes would you go, and how much punishment would you endure, in the service of a single goal? If there is a lesson, it’s that the path of the reduced man can lead to triumph, or madness, or both.
Read Full Review >>
Rave Mark Yost,
The Wall Street Journal
On its face, the book is an incredibly engaging and well-written account of one man’s quest to cross the world’s harshest and most barren continent unassisted. That means no motorized sled, no food drops; just Mr. O’Brady, slogging 900 miles on skis with a 375-pound sled in tow, dragging everything he needs to survive for nearly two months across a vast, frozen expanse that doesn’t change much from day to day except for the degree to which he has to contend with wind and snow ... Thankfully, the book is much more than that. In addition to chronicling the physical challenges of staying alive in such inhospitable terrain, Mr. O’Brady weaves in biographical details that make you care as much about the man as the mission. But where the author excels is in detailing the mental challenges of such an expedition in a way that makes his struggles and the lessons he learns relatable to the average person.
Read Full Review >>
Positive Kim Ode,
The Star Tribune
In 2018, Colin O’Brady made a grueling solo crossing of the Antarctic landmass, hauling a 300-pound sled for 54 days over more than 900 miles with no resupply or, he contends, assistance. Yet what constitutes assistance has spawned a chilblain within the adventurers’ community ...[O'Brady's] accomplishment (which became an unplanned-for race when the world learned that Briton Louis Rudd was pursuing the same feat) inspires awe, and his account of the trek is a compelling mix of bravado, fear, self-doubt, dream states, exhaustion and adrenaline. He’s a good writer ... While such achievements can prove lucrative on the speakers’ circuit, he also is passionate about inspiring children to know they can do more than they think possible. There’s likely no definitive verdict to be had here, pitting transparency against tenacity.
Read Full Review >>
See All Reviews >>
What did you think of The Impossible First: From Fire to Ice—Crossing Antarctica Alone?
© LitHub | Privacy