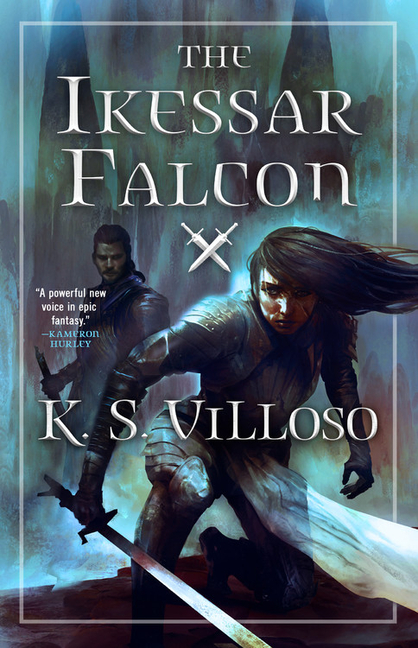 In the sequel to The Wolf of Oren-yaro, Queen Talyien's quest takes a turn for the worst as she stumbles upon a plot deeper and more sinister than she could have ever imagined, one that will displace her king and see her son dead.

What The Reviewers Say
Positive Noah Fram,
BookPage
... fast-paced to say the least. It transitions from the dark political fantasy of the first book to an apocalyptic epic reminiscent of Terry Brooks’ The Elfstones of Shannara at breakneck speed. There are almost too many plot twists and new developments to track, which would be confounding were it not for the strength of Villoso’s portrayal of Talyien. The queen is clearly in the same boat as the reader as she struggles to keep up with the sheer pace at which her world is being turned inside out. Perhaps the most compelling subplot is Talyien coming to terms with the nature of leadership and what it means to rule. The Ikessar Falcon also includes some fascinating developments in Talyien’s relationships, especially those with Rayyel, Agos and Khine. Villoso’s clear talent for characterization is as evident as ever ... compresses weeks of travel across oceans and continents into gaps between chapters. Although the characters are as compelling as ever, these shifts move Villoso’s series closer to the typical epic fantasy, and results in a much broader writing style than the tightly constructed, setting-specific voice of the first book ... retains the excellent characterization and intrigue of The Wolf of Oren-Yaro while expanding both its world and the plot at a head-spinning rate. It does everything the middle book of a trilogy should with an uncommon degree of authorial skill, and is a thoroughly entertaining read in its own right.
Read Full Review >>
Rave Kristi Chadwick,
Library Journal
The power plays are woven tightly into the action, as Villoso broadens her worldbuilding and adds some surprising twists ... Political intrigue and personal angst abound in this exciting sequel to The Wolf of Oren-Yaro, making this a must for epic fantasy readers.
Read Full Review >>
Positive Frances Moritz,
Booklist
This page-turner keeps readers, and Tali, surprised as she travels and grows as a character.
Read Full Review >>
See All Reviews >>
SIMILAR BOOKS
Fantasy

40
Alan Heathcock
Positive
What did you think of The Ikessar Falcon?
© LitHub | Privacy