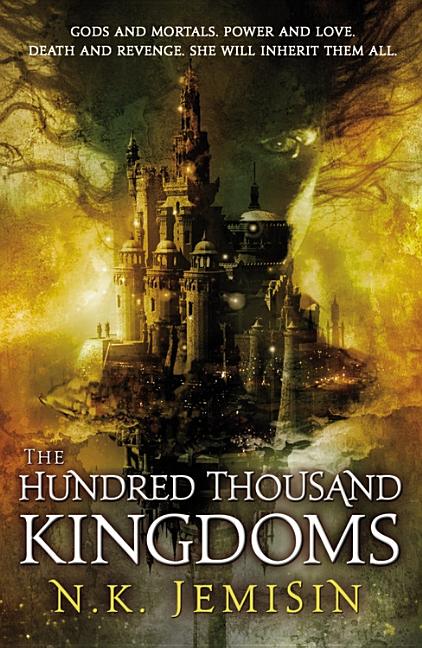 In this first installment of The Inheritance Trilogy, a young girl, mourning the mysterious death of her mother, is summoned to the majestic floating city of Sky in order to claim a royal inheritance she never knew existed.

What The Reviewers Say
Rave Thomas M. Wagner,
SF Reviews
Jemisin's enthusiastically praised first novel is, at heart, a sumptuously mounted soap opera. It's simply packed to the rafters with secrets and lies, skullduggery and betrayal, lust and anguish, all within the context of the most staggeringly dysfunctional family dynasty one can imagine ... She has a truly impressive skill for taking a plot so labyrinthine it would make a minotaur dizzy and guiding us through it with satisfying clarity. She knows how to time each of her story's juiciest reveals for best emotional impact ... Where much epic fantasy is about spectacle, The Hundred Thousand Kingdoms prefers intimacy. With Yeine as the first-person viewpoint character throughout, we see the drama unfold through all its head-spinning intricacies entirely through her eyes ... There are precious few books in the fantasy genre that can be said to be as refreshingly original in their approach as this one .... Haunting and heartfelt.
Read Full Review >>
Rave Kirkus
Debut fantasy features an intriguing, well-drawn mythology ... Jemisin’s world-building and attention to detail raise this story to another level ... Jemisin lavishes considerable care on her fictional universe, but she also creates a subtle, emotionally complex character in the thoughtful Yeine. Readers will definitely look forward to future installments of the projected Inheritance Trilogy ... An offbeat, engaging tale by a talented and original newcomer.
Read Full Review >>
Positive Samantha Nelson,
AV Club
The peeling away of secrets and lies makes for a compelling page-turner ... As with any new fantasy series, an early chunk of Kingdoms is devoted to laying out the world’s rules and a bit of its history. But once the framework is established, Jemisin skillfully fills it with strange societies, explaining their beliefs and traditions in a way that makes them seem real rather than fantastical ... The stars of the novel are the gods who come across as genuinely amoral and alien, capable of emulating humanity but never really a part of it.
Read Full Review >>
See All Reviews >>
SIMILAR BOOKS
Fantasy

The Memory of Souls
Jenn Lyons
Positive
What did you think of The Hundred Thousand Kingdoms?
© LitHub | Privacy