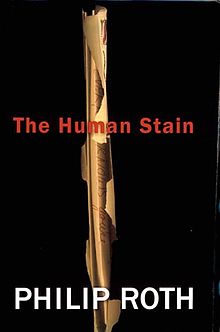 The Human Stain, the third in a trilogy, is a chronicle of an academic scandal and its impact on both the aging professor at its center and his friend—alter ego novelist Nathan Zuckerman.

What The Reviewers Say
Positive Lorrie Moore,
The New York Times Book Review
...The Human Stain, loosely belongs to a trio that includes these last two novels. They have many things in common: a nostalgia for old Newark; a handsome hero-fool; the handsome hero-fool's tell-it-like-it-is brother; and the presence of Nathan Zuckerman, Roth's literary doppelgänger, who is observer, bit player and imaginary channeler of all three novels ...its particular hero-fool is arguably the most socially intriguing character to whom Roth has ever devoted himself ... Roth has given us a man struggling with a truly independent way of being Jewish: pretending to be Jewish ... fails to extend understanding toward — and only makes fun of — the possible discomfort of minorities or women in settings ... Alone, prostateless, now outside the sexual fray, Zuckerman has become a melancholic poet of twilight and chagrin; the combination of perspicacity and weary tranquillity becomes him as a narrator ...an astonishing, uneven and often very beautiful book.
Read Full Review >>
Rave John Mullan,
The Guardian
Philip Roth likes to use a framing narrative in order to approach with investigative curiosity a tale of passion ... The Human Stain concerns a New England classics professor, Coleman Silk, who is hounded out of his job for alleged racism. His story is told by Nathan Zuckerman, who has, literally speaking, been employed as narrator. Silk has asked him to write the true account of the witchhunt that has ruined his career ... Roth's persistent use of the framing device suggests that he is but discovering stories that are already out there ... By thus framing his narrative Roth also unsettles our sympathies ... Within the frame of Nathan's record, the reader is allowed to know more than he could ever know. We are taken into Coleman's unspoken thoughts and into his secret past... The very flouting of the framing convention catches the author's own passionate, lucid exercise of his imagination.
Read Full Review >>
Positive Scott Tobias,
The A.V. Club
Sometimes clunky and overreaching, sometimes piercing and compassionate, Philip Roth's vital new novel The Human Stain completes a postwar trilogy ...Roth bends his story around the major issues of the day, taking on racial and ethnic identity, political correctness, and moral hypocrisy ...the central character of Coleman Silk, a septuagenarian classics professor who is less a full-bodied character than a vessel for Roth's loaded philosophies... The Human Stain is both a mark on the skin and the mark of experience, too messy and convoluted to be sorted out by moral high-mindedness ...Roth's anger is parlayed into a sort of damaged humanism, as he fills in the complicated and ultimately sympathetic histories of each character ...frequent alter-ego, Nathan Zuckerman, seems extraneous at first as Silk's hired biographer, his presence underlines what Roth sees as the author's role: to free the truth from ideologues like Roux and reveal it in all its cluttered, bountiful detail.
Read Full Review >>
See All Reviews >>
SIMILAR BOOKS
Coming Soon

What Could Be Saved
Liese O'Halloran Schwarz
Positive
What did you think of The Human Stain?
© LitHub | Privacy