The House on Vesper Sands 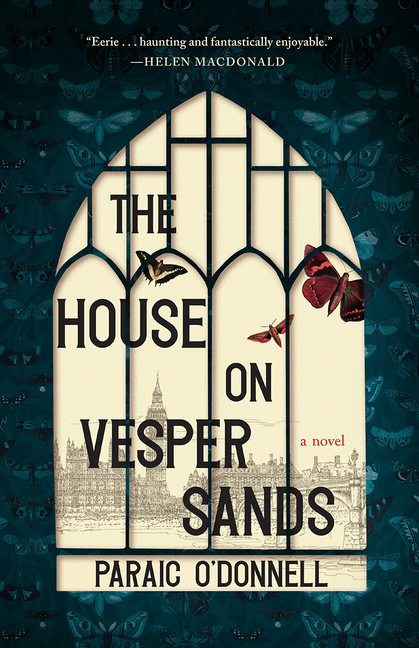 London, 1893. On the case is Inspector Cutter as well as Gideon Bliss, a Cambridge dropout in love with one of the missing girls. And clever young journalist Octavia Hillingdon sees the case as a chance to tell a story that matters―despite her employer’s preference that she stick to a women’s society column. As Inspector Cutter peels back the mystery layer by layer, he leads them all, at last, to the secrets that lie hidden at the house on Vesper Sands. O'Donnell's US debut.

What The Reviewers Say
Rave Clare Clark,
The Guardian (UK)
... the novel unfolds in a vividly evoked England during the bitter winter of 1893. From the first pages it promises the same gothic spookiness as its predecessor ... Death throws an ever-looming shadow over proceedings – the book’s sections are even named after parts of the Requiem Mass – but O’Donnell has no intention of serving up a standard Victorian chiller. Instead he has created a gloriously unorthodox confection, part Wilkie Collins, part Conan Doyle, with a generous handful of police procedural and a splash of Stella Gibbons’s Cold Comfort Farm. There is even a distinctly Hitchcockian interlude on a train ... structurally more satisfying and driven by a more compelling plot. O’Donnell has pulled off with brio something that might, in a lesser writer’s hands, have fallen horribly flat: he has written a coherent and satisfying novel that is both disquietingly eerie and properly funny. It is impossible to read it without laughing out loud. Sharp, impatient and eye-wateringly brusque, Inspector Cutter powers through the pages, relentlessly squashing the assiduous, overeducated Gideon with his scathing remarks. The determinedly diplomatic accounts Gideon writes of his superior’s interviews as he conducts his inquiries are comic works of art ... O’Donnell dispenses the waspish wit of the beau monde with Wildean relish ... Yet none of this detracts from the unsettling strangeness of the book’s central mystery ... The dramatic denouement is striking and pleasingly unexpected. And while the laughs provide welcome respite from the darkness, their greater achievement is to bring a kind of bracing tenderness to a tale that might, in these #MeToo times, have felt voyeuristic and exploitative. Beneath its spooky exterior The House on Vesper Sands is a paean to the unshowy virtues of determination, diligence and loyalty. It is also a cracking good read. The book ends with an epilogue that could be dismissed as superfluous, except that it plainly lays the ground for a sequel. Regardless of where one ends up filing this novel on the bookshelves, that is excellent news for us all.
Read Full Review >>
Rave Malcom Forbes,
The Star Tribune
O'Donnell grabs his reader's attention with his strange and atmospheric opener and doesn't let go ... a mock-Victorian tour de force that dexterously blends the drama of Dickens, the sensationalism of Wilkie Collins, and the mystery of Conan Doyle, with added chills and humor poured into the mix for good measure ... O'Donnell keeps his reader gripped with his fast pace, ingenious plotting and narrative twists and turns. His re-created world of costermongers and eel vendors, gin shops and boardinghouses, gentlemen's clubs and séance salons is vividly authentic. Cutter's punchy dialogue elicits laughs while the soul-stealing and 'half shades' imbue the proceedings with a welcome supernatural streak. A fiendishly entertaining winter's tale.
Read Full Review >>
Positive Clare McHugh,
The Washington Post
Paraic O’Donnell starts off The House on Vesper Sands in winter 1893, re-creating a foggy metropolis of dark menace and eerie beauty, and populated by a properly Dickensian cast ... Readers may be inclined to struggle with keeping track of the tale’s various strands, and the occult aspect at the heart of the mystery won’t be to everyone’s taste, but O’Donnell’s rendering of the past is faithful not only to how people ate, spoke and dressed in 1893, but also to how they thought. The House at Vesper Sands summons up that spirit, beckoning it from a long dead world and into our own.
Read Full Review >>
See All Reviews >>
SIMILAR BOOKS
Fiction

Small World
Jonathan Evison
Positive
What did you think of The House on Vesper Sands?
© LitHub | Privacy