The History of Bees 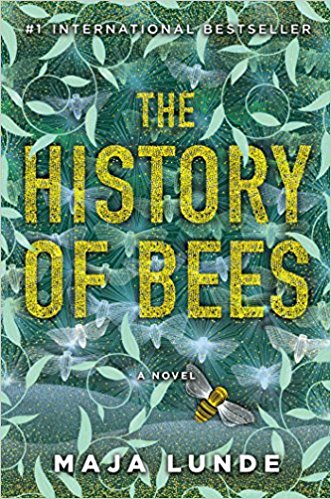 A "Cli-Fi" novel following three generations of beekeepers from the past, present, and future (a 19th-century British biologist, a millennial-era American beekeeper and a Chinese hand-pollinator on the cusp of a dystopian 22nd century) weaving a story of their relationship to the bees—and to their children and one another—against the backdrop of an urgent, global crisis.

What The Reviewers Say
Rave Kim Ode,
The Minneapolis Star Tribune
In the wrong hands, this tack could seem gimmicky. But Lunde threads a common string through these characters. The novel becomes far less about bees than about family — about how the relationship between parent and child can be passionate, desperate, tragic and uplifting ... Lunde is best known as a children’s author. This is her first novel for adults, but it’s hard not to think that her immersion in a youthful world informs her ability to write with a devastating elegance about the bond — or lack thereof — between parent and child ... A History of Bees is a dark read, and yet it ends on a wavering note of optimism. It’s been likened to Emily St. John Mandel’s 2014 sci-fi novel Station Eleven, with good reason.
Read Full Review >>
Positive Tori Latham,
The Atlantic
...the novel smartly relies limitedly on its ecological-disaster framework and instead gains its best footing in the quiet and intimate relationships it depicts between its characters. At times, it’s easy to forget you’re reading a novel exploring the consequences of a species extinction—instead, you’ve become invested in the lives of the people whose stories it follows ... At times, the moralizing about the environment and humans’ role in global warming can come across a bit heavy-handedly. But increasing awareness of the earth’s fraught future, in the end, is not the main thing the novel is trying to do. Instead, it wants you to consider what it is you feel deeply about—whether that’s achieving fame, standing by traditions, or protecting your family—and then consider whether you would sacrifice those things for the greater good.
Read Full Review >>
Mixed Ellie Robins,
The Los Angeles Times
...the novel illustrates that climate change isn’t a problem of tomorrow but of today. And by stretching the story’s tentacles back to the days of the Industrial Revolution, Lunde also demonstrates that the unsuccessful attempt to override nature isn’t merely underway, it’s two centuries old. Our children and grandchildren, goes the trope — but also us, our parents, grandparents and great-grandparents ... It’s a deftly managed if somewhat predictable story — but perhaps it’s precisely the novel’s pedestrian qualities that have made it such a winner: The History of Bees brings climate change into the realm of book-club fiction ... Lunde’s exploration of the tension between human instinct and the need for selflessness couldn’t be more timely. It’s just a shame that readers must settle for an earnest but contra-21st century and possibly contra-human entreaty about the meaninglessness of a single human life, rather than a more satisfactory reckoning of our shared future.
Read Full Review >>
See All Reviews >>
SIMILAR BOOKS
Fiction

The Women Could Fly
Megan Giddings
Rave
What did you think of The History of Bees?
© LitHub | Privacy