The Hazards of Good Fortune 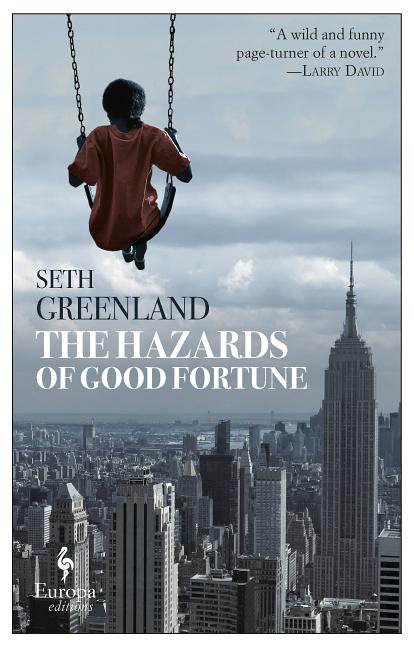 Jay Gladstone was born to privilege. He is a civic leader and a generous philanthropist, as well as the owner of an NBA team. But in today’s New York, even a wealthy man’s life can spin out of control, no matter the money or influence he possesses.

What The Reviewers Say
Rave Taylor Larsen,
Los Angeles Review of Books
Greenland unabashedly explores the hypocrisies surrounding false attempts at political correctness, deeply scrutinizing contradictory values and hidden resentments of an emblematic cast of characters ... Greenland seems to be having a great time with satire here, showing the multitude of ways people can be limited by the tunnel vision created by their backgrounds, ethnicities, and religions ... Greenland’s main strength, beyond superb characterization, is his ability to weave different narrative threads together in order to maintain maximum tension and forward momentum. His plotting is masterful. Indeed, it is impressive that his book never seems to wander into distracted territory or lose its focus as the primary characters come crashing together in escalating plot points involving sexual betrayal, racial politics, and lost dreams. Greenland leaves no stone unturned in exploring his themes of racism, the privileges of race, and the intricacies and potential corruption of the justice system. The media is used to great effect ... This epic book, which can be exhausting in its thoroughness, is provocative and satisfying ... The book is undeniably bold, original, and deeply impressive in its investigation of the desire for greatness, along with the need to escape one’s background in order to arrive at some higher experience that seems just out of reach, during a specific time in recent history.
Read Full Review >>
Rave Daniel Akst,
The Wall Street Journal
A deftly plotted novel...The Hazards of Good Fortune is nothing if not ambitious ... The plot echoes Tom Wolfe’s similarly concerned Bonfire of the Vanities, while avoiding most of its cartoonish excesses ... It’s easy to overlook this Grecian formula because so much of what’s in the novel feels torn from the day’s headlines, but at base this is a tragedy in the classical tradition ... What Mr. Greenland has noticed is that we’ve finally begun to democratize who gets to be a bigshot, and he casts his tragedy accordingly. Terror and pity abound, but now the titanic protagonists are Jews, blacks, women and others once cast hopelessly among the hoi polloi. And all of them are just as much in karmic thrall as the grandees who came before them, undone by ambition, rashness and cosmic retribution ... No brief account can do justice to the many moving parts of the story, or to how funny it can be. Much of Hazards is wickedly satirical, including what must be the most savagely hilarious Passover Seder since the Jewish exodus from Egypt. Despite the inexorable nature of [protagonist] Gladstone’s downfall, this is a book full of marvelous surprises that seem inevitable as soon as they happen.
Read Full Review >>
Mixed Paul Wilner,
San Francisco Chronicle
Greenland takes up the realistic torch in his new novel, The Hazards of Good Fortune — be assured, they are plentiful — which casts a satiric eye on the inconvenient intersections between late-stage capitalism, racial politics and the unintended consequences of technology ... [Greenland's] portrayal of race is more nuanced than that of Wolfe, who too often lapsed into stereotypical patois while rendering his version of black dialogue ... He deserves props for taking on a broad canvas — controversies of the day, from Black Lives Matter to Occupy fading in the rear view as we respond to the latest tweets. But what he gains in width, he too often lacks in depth ... He has a weakness for plot twists that get his characters off the hook — no spoilers; read it and see — and The Hazards of Good Fortune is no exception ... Greenland deserves credit for taking on our increasingly dysfunctional republic. Stalking the beast is no mean task. But in the end, Gladstone, no less than Gatsby, has to come to terms with the accident, and hazards, of fortune.
Read Full Review >>
See All Reviews >>
SIMILAR BOOKS
Fiction

Each of Us Killers
Jenny Bhatt
Rave
What did you think of The Hazards of Good Fortune?
© LitHub | Privacy