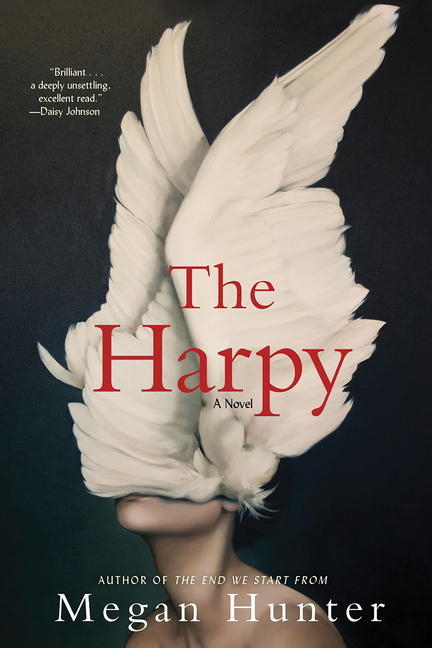 When Lucy finds out that her husband Jake has been having an affair with an older colleague, they decide to stay together, but make a special arrangement designed to even the score and save their marriage―she will hurt him three times. As the couple submit to a delicate game of crime and punishment, Lucy herself begins to change, surrendering to a transformation of both mind and body from which there is no return.

What The Reviewers Say
Rave Roger Cox,
The Scotsman (UK)
What’s the point of writing an unoriginal sentence? A predictable sentence? A sequence of words that has been committed to paper hundreds, perhaps thousands of times before? This seems to be Megan Hunter’s starting point whenever she sets out to write a novel … in The Harpy…flashes of inspiration are spread… sparingly through the text, and if anything this gives them even greater impact. Rather than trying to land a haymaker with every punch, it’s as if Hunter is learning how to box clever, adding more variety to her repertoire, ducking and weaving before landing a decisive blow … you can’t help wondering if this isn’t Hunter’s challenge to herself: to write a novel about infidelity that is somehow different from all the others that have been published before, and to find her own, original language to do it in … If that was her goal, she has succeeded on both counts. As already discussed, the original language part of the equation was never going to present her with too much difficulty, but she also manages to elevate her story to something that is at once rooted in the everyday and effortlessly transcends it … a gripping, psychologically astute account of a relationship in free-fall.
Read Full Review >>
Positive Helen Charman,
The Guardian (UK)
Within this fairytale framework, Hunter’s purposefully non-specific …adds an atmosphere of vague threat, which has a curiously numbing effect. Italicised interludes told from the perspective of the eponymous harpy that Lucy appears to transform into invite a paranoid mode of reading: as Lucy and her family go about their daily lives, it feels as if we’re watching them inside a specimen jar, experimental evidence of human beings’ capacity to damage each other … asks its readers to consider whether emotional violence can be uncoupled from its physical counterpart, and whether one can justify the other. By blurring the boundaries of the two – a mild poisoning and revenge pornography occupy the same textual category of harm – the novel sketches out the unsettling psychological terrain that can lie beneath bourgeois marital composure.
Read Full Review >>
Rave Rabeaa Saleem,
The Irish Times (IRE)
The prose is brilliantly cinematic, gauging the escalating emotional intensity of Lucy’s anger with taut language … What is most arresting about the narrative is how it charts the metamorphosis that takes place inside Lucy, both psychologically and physically, as she begins to recognise the emotional reverberations of the betrayal … As with her debut, Hunter writes about the intricacies of motherhood with striking nuance … This surreal, eviscerating work of fiction lays bare the drudgery of suburban marriage and delves into institutionalised gender roles.
Read Full Review >>
See All Reviews >>
SIMILAR BOOKS
Fiction

Aesthetica
Allie Rowbottom
Positive
What did you think of The Harpy?
© LitHub | Privacy