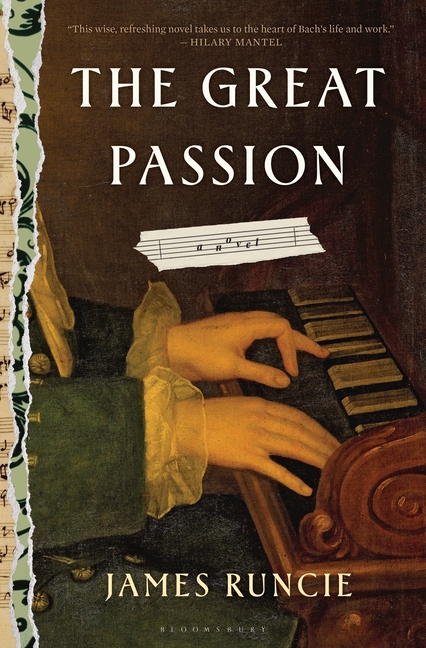 In 1727, Stefan Silbermann is a grief-stricken thirteen-year-old, struggling with the death of his mother and his removal to a school in distant Leipzig. Despite his father's insistence that he try not to think of his mother too much, Stefan is haunted by her absence, and, to make matters worse, he's bullied by his new classmates. But when the school's cantor, Johann Sebastian Bach, takes notice of his new pupil's beautiful singing voice and draws him from the choir to be a soloist, Stefan's life is permanently changed.

What The Reviewers Say
Rave Boyd Tonkin,
The Wall Street Journal
Mr. Runcie must have felt called (like the narrator of his novel) 'to perform something that was just beyond my capabilities.' The project risks bathos. Yet, in spite of a few minor wobbles, it succeeds thanks to its avoidance of cloudy rapture and to a bracing focus on the sweat and tears that drove Bach’s peerless 'attempt to understand what it means to live and what it is to die.' This Passion unfolds in toil and travail amid the chill of drafty chambers and the stink of beasts, turnips and tobacco, with 'the inevitability of loss and sorrow' as the ground-bass of each page ... Mr. Runcie shows how sublime art can bloom in mundane soil as he evokes the composer and his city through the eyes of a chorister and organ student, Stefan Silbermann ... Mr. Runcie’s composer has a tendency to sermonize. He indulges it a little too often: The story sags at a few prosaic moments. Still, the novelist busily varies his tone with deft cameos of characters ... The Great Passion shows—without a trace of glibness—how timeless art grows out of 'fragile, flawed and human' lives shadowed by fear, guilt and grief.
Read Full Review >>
Positive Anne Foley,
Booklist
Runcie, author of the popular Granchester Mysteries series, vividly imagines a young chorister as witness to the creation of J. S. Bach’s renowned St. Matthew Passion ... Runcie beautifully renders each character’s humanity and convincingly portrays a creative environment, grounded in faith, where 'music-making [is] a mixture of rules and invention, discipline and playfulness.' Knowledgeable readers will appreciate the author’s extensive use of music history and technical detail balanced with notes of poetic imagery, such as a flute line 'skipping and quicksilver.'
Read Full Review >>
Rave Publishers Weekly
Runcie, best known for his empathic Grantchester mystery series, displays the same gifts for characterization in this account of Johann Sebastian Bach’s composition of the 'St Matthew Passion' in 1727 ... Runcie pulls off an intricate and accessible description of the innovative piece and its composition, which was designed to make the death of Jesus feel immediate, so that listeners of the 'Passion' would understand 'how people crucify Christ every day.' Runcie captures, as well as anyone could with words, how Bach realized his aim of making music accompanying lyrics about Christ’s suffering 'as shocking and unpredictable as grief itself.' This is historical fiction of the highest order.
Read Full Review >>
See All Reviews >>
SIMILAR BOOKS
Fiction

This Other Eden
Paul Harding
Rave
What did you think of The Great Passion?
© LitHub | Privacy