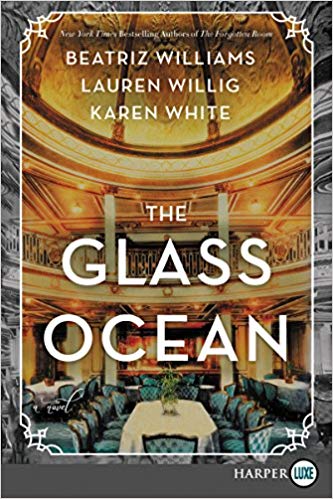 The lives and loves of three remarkable women—two in the past, one in the present—and the tragic final voyage of the HMS Lusitania.

What The Reviewers Say
Rave Leah DeCesare,
Bookreporter
Deceit and betrayal, traitors and patriots, con artists and society women, scandal and infidelity, metaphors and symbols - The Glass Ocean has it all. Full of quippy, playful and clever banter, I found myself chuckling out loud at times. The relationship plot lines are terrific stories of push and pull, unreciprocated desires, witty dialogue and clever observations. One such line, another from Tess, stood out and made me consider it: 'It’s easy to love someone you can’t have. There’s no risk in it.' What do you think? Readers are in for a fantastic read as they join the characters on the final voyage of the Lusitania.
Read Full Review >>
Rave Melissa Norstedt,
Booklist
Williams, Willig, and White work together again to create a riveting historical mystery. This time they follow three women who are linked by the tragic sinking of the RMS Lusitania.
Read Full Review >>
Rave Publishers Weekly
Williams, Willig, and White form a spectacularly winning team for this action- and romance-packed historical novel. The story is seamlessly narrated in alternating chapters by two American women aboard the British luxury liner Lusitania on its fateful final cruise in 1915 and by a 21st-century writer trying to unearth a family secret ... The story toggles effortlessly between timelines, building romance and intrigue to a hellish climax at the Lusitania’s sinking—and to the completion of a book Sarah never intended to write 100 years later. The result is an unputdownable thriller.
Read Full Review >>
See All Reviews >>
SIMILAR BOOKS
Coming Soon

The Forger's Daughter
Bradford Morrow
Rave
What did you think of The Glass Ocean?
© LitHub | Privacy