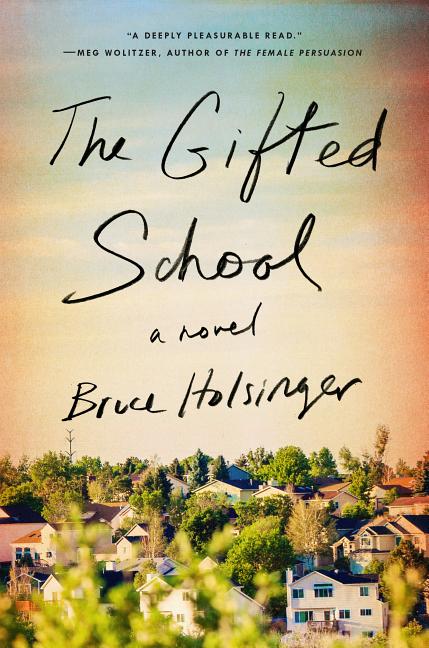 Four couples moved to Colorado Crystal about the same time, and now, 10 years later, the wives have become closely knit as their youngest offspring approach middle school. When they get wind of the imminent opening of Crystal Academy, “a new public magnet school for exceptional learners,” the ties binding the four families begin to unravel. While each mother seems to root for all their children to make the cut, behind the scenes a different story unfolds as lies are told and old jealousies surface.

What The Reviewers Say
Rave J.Courtney Sullivan,
The New York Times Book Review
...wise and addictive ... The Gifted School is the juiciest book I’ve read in ages. It’s a testament to Holsinger’s storytelling prowess that a novel revolving largely around something called the Cognitive Proficiency test (or the CogPro, as everyone refers to it) manages to be both a suspenseful, laugh-out-loud page-turner and an incisive inspection of privilege, race and class. By the time the characters get swept up in the second round of the admissions process...the lying, jealousy and backstabbing reach staggering heights ... Holsinger doesn’t shy away from the moral questions implicit in defining what it means to be gifted without acknowledging that not all children start from a level playing field ... A novel’s success or failure lies in a series of small choices on the part of its author. At nearly every turn, Holsinger makes smart ones — right up to the book’s stunning final lines.
Read Full Review >>
Positive Katy Waldman,
The New Yorker
Holsinger captures the language of anxious parenting: the neuro-jargon, the tone of chirpy terror ... Intriguingly, Holsinger tends to filter the story through his least sympathetic characters ... Atik’s is the only plotline with real stakes—elsewhere, the reader feels as though she is watching an enthralling, faintly distasteful sporting event, like a hot-dog-eating contest. There are moments of white-liberal affectation so sublime that they waft off the page like laughing gas ... And yet the oblivious parents are more than fodder for hate-reading. Holsinger renders his helicopter moms and soccer dads so precisely that one understands their motivations, even feels their longing and pride ...The book exposes how easily a mix of good intentions, self-delusions, and minor sins can escalate into the kind of skullduggery that might prompt an F.B.I. sting ... Holsinger leaves the political implications...largely unexplored. What he does show is...these parents committing, in Rose’s rueful words, a 'collective crime against childhood.' While the adults of Crystal dream of meritocracy, their kids bear the burden.
Read Full Review >>
Positive Ron Charles,
The Washington Post
One wants to say that The Gifted School is preternaturally timely, but it feels, instead, like a faint imitation: a story dripped from the headlines. And even if current events didn’t overshadow The Gifted School, the novel’s opening would still feel weighed down by its desultory pace ... Although The Gifted School starts too slowly, once the story gets moving, it builds impressive momentum ... There’s plenty of wry humor in Holsinger’s portrayal of this dysfunction, especially the moral gymnastics that liberal parents perform to preserve the purity of their ideals ... But Holsinger is not at heart a satirist, or at least not a mean one. These harried parents and their children are drawn with real sensitivity, and despite how horribly some of them act, he doesn’t sacrifice anyone on the altar of his wit. His regard for their dreams and fears, regardless of their weaknesses and failings, remains deeply humane. Indeed, for such a relentless diagnosis of the toxic culture we’ve created, The Gifted School is, ultimately, a surprisingly hopeful novel. There’s a sweetness to its resolution, a satisfying possibility that no matter what monsters we parents are at times, we can still graduate to something better.
Read Full Review >>
See All Reviews >>
SIMILAR BOOKS
Fiction

The Chinese Groove
Kathryn Ma
Rave
What did you think of The Gifted School?
© LitHub | Privacy