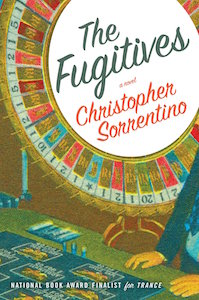 To escape his turbulent private life and the scandal that’s maimed his public reputation, Sandy Mulligan has retreated from Brooklyn to the quiet Michigan town where he hopes to finish his long-overdue novel. There, he becomes fascinated by John Salteau, a native Ojibway storyteller who regularly appears at the local library. But Salteau is not what he appears to be—a fact suspected by Kat Danhoff, an ambitious Chicago reporter of elusive ethnic origins who arrives to investigate a theft from a nearby Indian-run casino.

What The Reviewers Say
Rave Viet Thanh Nguyen,
The New York Times Book Review
Like one of Nanabozho’s simple, spare tales, Sorrentino’s novel might be a little deceptive because it disguises its complexity. Those tricked by Nanabozho or Sorrentino are guilty of not listening closely enough. The trickster is a cunning storyteller, as is Sorrentino. Not that he’s just some smart guy who writes excellent sentences. He also delivers what any reader of a thriller would expect. Rest assured that by the end of the book guns are drawn, shots are fired and we finally hear the voice of the dead.
Read Full Review >>
Rave Jim Ruland,
The Los Angeles Times
The Fugitives is neither an experimental high-wire act nor a plodding whodunit but something in between, an entirely new kind of novel with exceptional interior monologues animated by deception, double-dealing and a doomed affair that lends an air of existential dread to the story.
Read Full Review >>
Pan Dwight Garner,
The New York Times
Christopher Sorrentino grafts a halfhearted, Elmore Leonard-style casino heist plot onto what is fundamentally the mournful story of one man’s failures as a writer, a husband and a father. The result is something close to a disaster. The elements don’t mesh, and what we’re left with is what’s called, in the video game world, at least, a mutual kill: Each side is fatally damaged.
Read Full Review >>
See All Reviews >>
SIMILAR BOOKS
Literary

Please See Us
Caitlin Mullen
Rave
What did you think of The Fugitives?
© LitHub | Privacy