The Fruit Thief: Or, One-Way Journey Into the Interior: A Novel 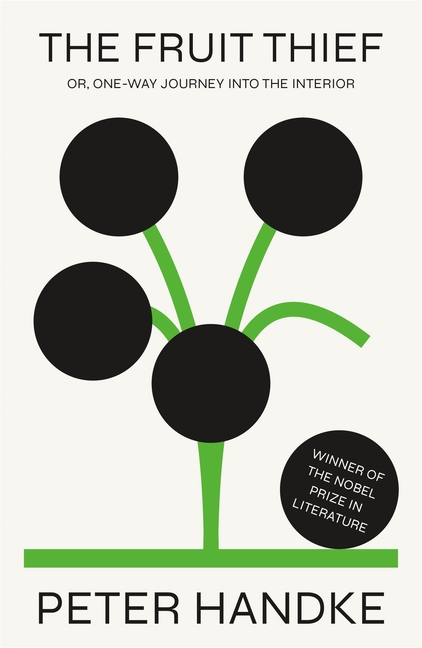 A novel describing the wanderings of a young woman called "the fruit thief" through northern France from Nobel laureate Peter Handke.

What The Reviewers Say
Pan Rob Doyle,
The New York Times Book Review
A dozen pages into reading The Fruit Thief, I had the not unexciting realization that, if nothing else, for the next 300 pages I was in for an experience of unadulterated literature: that is, a work that would pay not the slightest heed to genre conventions, commercial imperatives or even — this I was less enthusiastic about — the reader’s timid expectation that he might be shown a good time. I was also reminded that I was dealing here with a very slippery fish ... The phantom limb pain of expecting that we will revert to the 'I' perspective fades into an acceptance that we’re stuck with Alexia for the remainder ... While there is no shortage of descriptive color and incident, albeit of a low-voltage variety, this long stretch — the bulk of the novel — is, frankly, hard going ... As an avant-garde firebrand in the 1960s, Handke wrote an 'anti-play' titled Offending the Audience, but now his strategy has shifted perilously close to Boring the Audience to Tears. Much like the narrator imagining the character of the fruit thief, I kept trying to envision a subset of readers who genuinely find this stuff delightful. Lacking most of the elements that draw people to fiction — insight, suspense and so on — it falls to either the language or the narrative material itself to make the novel worth the reader’s while. Although both have their moments — a mad speech in the final pages, an interlude at an inn that takes on the lighting and atmosphere of old European folk tales — the meal served up by this deeply eccentric novelist is spare and saltless, with no wine and no dessert. I suspect it’s the destiny of such an uncompromising writer as Peter Handke to end up writing basically for an audience of one. His most loyal readers, perhaps, adopt an attitude of veneration, hushed and solemn and more or less bored, the way many people attend Mass.
Read Full Review >>
Rave Jacqueline Snider,
Library Journal
Every experience here becomes part of Handke’s gorgeous, multilayered tapestry ... Handke’s work was first published in 2017 in German, and this excellent English translation highlights the picaresque nature of the story. Alexia is an appealing vagabond as she moves from one episode to another, and Handke is a marvel at capturing and digging deeply into the history, sights, sounds, smells, and feel of France, which comes alive in his masterly hands.
Read Full Review >>
Positive Michael Autrey,
Booklist
This is almost a prehistory of experience, a demanding, engrossing narrative tracking tiny moment-to-moment changes of mood and impression, the sort of interior detail most writers would consider insignificant. Indeed, this intense focus on interior minutia creates a sense of tedium as Handke avoids providing so much of what we expect from novels. Then again, life has a way of giving us too little of the kind of excitement we crave ... Handke offers a reading experience that requires, and repays, a certain surrender.
Read Full Review >>
See All Reviews >>
SIMILAR BOOKS
Coming Soon

Fellowship Point
Alice Elliott Dark
Rave
What did you think of The Fruit Thief: Or, One-Way Journey Into the Interior: A Novel?
© LitHub | Privacy