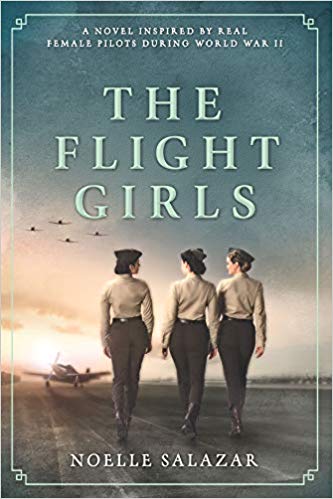 1941. Audrey Coltrane takes on piloting planes, helping soldiers, and breaking the glass ceiling in Salazar’s debut novel. When Audrey's beau, Lieutenant James Hart goes missing in action, the bonds between Audrey and her fellow female pilots give Audrey the strength to cross the front lines and fight not only for her country, but for the love she holds so dear.

What The Reviewers Say
Mixed Tom Navratil,
Washington Independent Review of Books
The vibe is Nancy Drew + Top Gun ... Despite the display of various period details, readers unfamiliar with 1940s America will learn little more than that handwritten letters served as the primary means of long-distance communication, and social dancing was far more prevalent than it is today. They may also develop the impression that coincidence, or stalking, served as the indispensable driver of romantic pursuits ... That is about the extent of any focus on the events and attitudes of the time. In the world of this novel, never an angry word, much less an ethnic slur, is expressed against the Japanese by the nearly all-white cast. In a similar vein, the narrative is perfectly blind to racial segregation in the military or anywhere else ... As for the broader portrayal of gender relations: Even the disdain and sexual harassment the female pilots face, covered in a couple of brief sketches, serve mainly to underscore their gumption. The toll such adversity takes remains unexplored ... And, yet, the story flows along agreeably and with pace. It is welcoming and immersive, even for nitpickers who notice timeline glitches and misfired words ... As a standard-issue coming-of-age romance, The Flight Girls soars to its destination and delivers its payload directly onto the target. Mission accomplished for fans of the genre. But readers drawn by the title, the Eleanor Roosevelt epigraph, and the proclamation 'A novel inspired by real female pilots during World War II' may expect a different type of story. Honest marketing would replace those warplanes on the cover with a strapping airman — his flight suit fully zipped, given that the steam setting is on low. Enjoy this tale for what it is. Isn’t that the essence of love?
Read Full Review >>
Mixed Carolyn Haley,
New York Journal of Books
... surface elements give the impression you’re going to get a historical novel about the Women Airforce Service Pilots ... a closer look at the cover and blurb reveals that The Flight Girls is actually a romance, put out by a romance publisher. From page one to the end, it proves to be little more than a contemporary YA romance thumbtacked onto a bulletin board of postcards bearing the names of historic planes and places ... The book contains multiple bloopers in period-appropriate vocabulary and facts, which throw knowledgeable readers out of the story. There are also some copyediting inconsistencies that would make a pro shudder ... Readers who keep turning pages hoping something interestingly airplaney will happen might be ready to slap [Audrey] by the halfway point. In contrast, readers who love to experience feelings, over and over again from different angles, and who have struggled with individualism in a society that demands conformity, should be able to relate to Audrey’s troubles, desires, and goals. Strong historical fiction incorporates character crisis into its time and setting. This book explores only one level, placing a character study against a blurry historical backdrop ... Whether [Salazar] succeeds at making you 'fall in love' depends on who you are and what you expect from this novel. If you’re the right reader, you’ll have a soaring experience. If you’re the wrong reader, it will be a crash landing.
Read Full Review >>
Mixed Cindy Burnett,
Bookreporter
Flight Girls engages the reader when the story is focused on the female pilots and the work they accomplish both in Hawaii and back in the United States ... Salazar brings these tales to life in an entertaining manner, allowing the reader to understand the important role they played in the war effort while also highlighting the many challenges they faced. Salazar also successfully depicts Audrey’s female relationships and the bonds she and her friends develop ... Where the story stagnates is Audrey’s love life. From the beginning, her relationship with Lieutenant Hart is awkward, unfulfilling and frankly a little baffling. As the years pass and Hart heads to Europe to fight in the war, their story becomes even less compelling, and Audrey’s relationship choices continue to hinder the novel instead of add to it.
Read Full Review >>
See All Reviews >>
SIMILAR BOOKS
Coming Soon

Better Luck Next Time
Julia Claiborne Johnson
Rave
What did you think of The Flight Girls?
© LitHub | Privacy